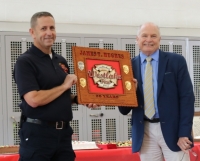 Mayor Dennis Clough presented the outgoing chief with a Proclamation noting his 29 years with the City of Westlake. He became Fire Chief in December 2014. The Proclamation also detailed his previous experience as a firefighter and in the Air Force, where he received several decorations and attained the rank of Master Sergeant. Hughes also has worked as a part-time police officer for Olmsted Falls.

In addition to a Proclamation from the Mayor, Hughes also was presented a commemorative plaque, a handwritten message from Ohio Governor Mike DeWine and a letter from the Ohio Fire and Emergency Services Foundation recognizing his outstanding career.

More photos from the retirement event are available on the City of Westlake's Facebook page, www.facebook.com/cityofwestlakeohio.