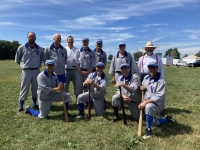 The Villagers, an old time base ball team comprised primarily of Bay Men's Club members, formed in 2010 to help celebrate the city's bicentennial and has continued to compete every year since.

Playing under rules in effect in 1860, The Villagers, led by player/manager John Underation, battled their long-time rivals, the Whiskey Island Shamrocks, on Saturday, July 1, at Bay Days, falling by a score of 10 to 0.