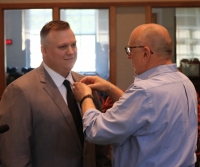 Firefighter/Paramedic Jacob Plocica has his new badge pinned to his lapel by his father.

The Westlake Fire Department welcomed two new firefighter/paramedics to the City of Westlake with a swearing-in ceremony at City Hall on July 13.

Jake Koneval and Jacob Plocica were sworn in by Mayor Dennis Clough in front of family, friends and colleagues as Acting Fire Chief Mike Freeman and Captain Doug Vasi looked on. Freeman said a few words about both of the firefighters' exceptional character and work ethic, noting that such characteristics are essential to becoming a firefighter in the City of Westlake.

Koneval comes to Westlake from the Brunswick Hills Fire Department where he had worked since March 2021. He also previously worked as an EMT at Donald Martens and Sons and a patient service specialist for the Cleveland Clinic Foundation.

Plocica previously worked as a firefighter/paramedic for Eaton Township Fire Rescue starting in August 2021. Prior to that, he served as a paramedic at UH St. John Medical Center.