Wonderful work: Joan Kemper honored as Clerk of the Year 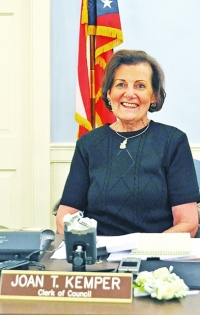 Joan Kemper, Bay Village Clerk of Council, was named the 2022 Clerk of the Year by the Ohio Municipal Clerks Association. Photo by Denny Wendell

To those of us who interact with Bay Village City Council on a regular basis, Joan Kemper is the Clerk of Every Year. She is dedicated to her craft; eager to help others; incredibly kind, caring and thoughtful; the epitome of a public servant.

For the past 57 years, Joan has served the public in various roles. At age 82, she still works late into the evening and on weekends when the job calls for it, preparing packets of information for council members, conducting comparative research with other cities, responding to public requests and, of course, diligently transcribing the minutes of public meetings.

“Joan is admired by everyone with whom she connects,” remarked City Council President Dwight Clark. “She is the ultimate City of Bay Village ambassador to our residents, colleagues, friends and acquaintances. She is the model of consistency and professionalism, one who represents the ideal qualities of a dedicated public servant. No employee with the City of Bay Village comes in earlier and stays later than Clerk Kemper. She can make a pot of hot coffee and bring a smile to one’s face, second to none."

Last month, Joan was recognized by her peers for her professionalism and dedication, receiving the prestigious 2022 Clerk of the Year award from the Ohio Municipal Clerks Association.

“Joan is amazing and so worthy of this designation!” exclaimed Denise Rosenbaum, Westlake’s Clerk of Council.

Joan began her career in public service at the age of 24, following in her mother’s footsteps. She developed a passion for local government from an early age as she accompanied her mother to work as a bookkeeper for the City of Parma. Joan kicked off her own municipal career as a police dispatcher for the City of Brooklyn. A short time later she was hired as the mayor’s secretary, and served in many other capacities before retiring from Brooklyn in 1998 with over 33 years of service.

Not being one to slow down, Joan sought part-time work in her “retirement” and was hired by the City of Bay Village in 1999 as a receptionist and utility billing clerk. That brief respite lasted only two years; Joan resumed full-time work in 2001 when she was appointed Clerk of Council and Secretary to Boards and Commissions.

Joan is involved in the industry’s various organizations, earning her Certified Municipal Clerk certification from the International Institute of Municipal Clerks in 2021. She regularly attends the Ohio Municipal Clerks Association’s meetings and learning opportunities.

She belongs to the Northeast Ohio Municipal Clerks’ Association, where she has served as past president; is a Lifetime Honorary Member and past president of the Cuyahoga County Mayors’ Secretaries Association; and also serves as a Notary Public.

A lifelong learner, Joan passes those ideals along to her colleagues. Upon earning her CMC certification, she encouraged other clerks “to work toward his or her certification. The things you learn along the way are so helpful in your career. This municipal work is wonderful work. It is a pleasure and honor to serve my fellow citizens, and a privilege to be able to learn from each other.”

Joan is active in the community and credits her stamina to her strong faith, healthy diet, and desire to help others. She is a devoted member of St. Raphael Parish. On the weekends, she is a water yoga/water aerobics instructor for University Hospitals, and she especially enjoys sharing these activities with older folks to help them stay healthy. She grows organic vegetables in the Bay Village Community Garden. Joan loves her family and is a proud mother, grandmother and great-grandmother.

The warmth that Joan radiates to others is reflected by the abundance of praise she has received upon receiving her Clerk of the Year award.

“Overall, Joan is a truly incredible woman, and her dedication and endurance in both her work life and personal life is an inspiration to us all,” wrote Julie Ogg, chair of the OMCA Clerk of the Year committee. “Her character is truly genuine and kind, and she embodies what a municipal clerk represents, the heart of the City.”