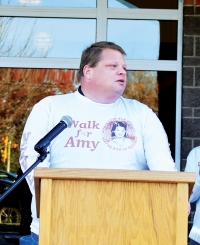 Jason Mihaljevic, brother of Amy, thanks the Walk for Amy crowd on Oct. 27 for their continuing support in solving his sister's disappearance. Photo by Denny Wendell

Thirty-three years have passed since the disappearance of 10-year-old Amy Mihaljevic after she vanished from the Bay Square Shopping Center in Bay Village on Oct. 27, 1989. The abductor had contacted Mihaljevic by telephone and arranged to meet her on the pretext of buying a gift for her mother because she had recently been promoted, as he told her.

On Feb. 8, 1990, the girl's body was found in a field in rural Ashland County. Evidence at the scene included the presence of yellow/gold colored fibers on her body. It appears her killer took several souvenirs including the girl's horse-riding boots, her denim backpack, a binder with "Buick, Best in Class" written on the front clasp, and turquoise earrings in the shape of horse heads.

The Bay Village Police and the FBI conducted an extensive investigation into her disappearance and murder. The case generated thousands of leads. Dozens of suspects were asked to take lie-detector tests, but no one has ever been charged with the crime. Law enforcement continues to pursue leads and monitor suspects to the present day. More than 20,000 interviews have taken place during the investigation, and the case is still open.

For three years, Bay Middle School teacher Mark Kevesdy has organized a one-mile walk as a fundraiser to assist the police and FBI in their continuing investigations into Amy's kidnapping and murder. This year's walk was held on Thursday, Oct. 27, the anniversary of her disappearance.

Bay Village Police Chief Robert Gillespie told the walkers: “I want you all to know that this case is an open and active investigation. We are still getting tips from people locally and around the country. ​We are utilizing the newest technologies to re-test evidence that we currently have. It only takes one piece of evidence to tie many pieces together. ​I encourage anyone who knows anything about this incident to call the Bay Village PD."

The FBI has offered a $27,000 reward to anyone who can provide information that leads to the arrest and conviction of the killer of Mihaljevic.