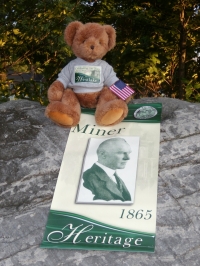 This summer has been filled with Westlake Bicentennial activities and there are more to come in the fall. Last week, Dover Bear heard some Westlake Historical Society members making plans for the Jack Miner Day and Rubber Duck Race in August 2012. Dover was fascinated by what he heard about this man named Jack Miner. To learn more about him, he visited the Jack Miner birthplace rock and Ohio Historical Marker placed on the corner of Dover Center Road and Westown Boulevard.

Dover read on the marker that Jack Miner was born April 7, 1865, in the section of Dover Township that was known as Dover Center. He lived in a small weather-beaten home with a leaky roof on Dover Center Road near the street we call Westown Boulevard today. Young Jack was one of 11 children, born of English parents who made a meager living in the brickyard across the street from their home. Jack’s father worked long hours to form the bricks that were sold for only $3.50 per 1,000.

As a young boy, Jack liked to work in the brickyard instead of attending school. He was not fond of school because he was teased for his English ancestry, red hair and freckles. At age 12, Jack met his new teacher, Miss Minnie Chubb, who gave him the job of starting and tending the fire in the schoolroom stove. This job helped to provide Jack with more of a sense of belonging and he seemed to like school a little more.

Jack spent hours at Cahoon Creek near his home studying the lessons of nature. The creek was both a laboratory and play area. With great enthusiasm, he studied the habits of all that crept and swam. In addition, he learned lessons on birdlife that formed a foundation for his life’s work.

When Jack was 13 years old, the Miner family reluctantly decided to move the family to Kingsville, Ontario, Canada. Although it was difficult leaving friends, the move provided a new income for the family and supplied new wildlife for Jack.

Jack went on to become a great conservationist (once named the fifth-best-known person in North America) and conceived the idea of reforestation and a sanctuary to protect wildlife.

He began the practice of banding Canada geese to study their migration habits and turned his sprawling farm into one of North America’s first bird sanctuaries, earning him the nickname “Wild Goose Jack.” He also lectured throughout the United States and Canada.

Auto pioneer Henry Ford once said, “Jack Miner’s companionship with the birds and his service to them have made his work known and have warmed the hearts of good people everywhere. He has taught us all that there is always something to do for one who looks for something to do.”

In Jack’s autobiography, he wrote, “It must be remembered that I was born, and spent my innocent boyhood days, in that dear old Dover Centre, Ohio; and I love the descendants of the men who were kind to me in my barefoot days.”