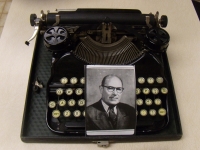 The beloved high school principal from 1926-1952, John D. Read's photo and typewriter are on display at the Clague House Museum.

This influx of new residents, many with families that included small children, caused a need for more homes, schools, shopping areas and better roads. Four new school buildings opened during the 1960s. During the decade, seven operating levies and one bond issue were passed.

In 1961, two schools were built. The first was a new high school located on Hilliard Boulevard and was dedicated on August 6 of that year. Grades seven, eight and nine were still housed at the old high school that was renamed Lee Burneson Junior High School, in honor of Lee Burneson who served as superintendent of the Dover/Westlake Schools from 1924 to 1963. The second new building proudly opened in 1961 by the Board of Education was Holly Lane Elementary School, in October 1961.

A new football field had been in the planning stages as early as 1947. In 1952, the unexpected death of Westlake High School principal John Read prompted the Booster Club, students and faculty to name the new football field the John D. Read Field. On Sept. 8, 1952, the school board voted to approve the naming of the field.

The 1953 Panorama yearbook was dedicated in memory of Mr. Read and his efforts to "improve Westlake High School and make it a better place for all of us. ... Although he is gone, John D. Read will forever live in the hearts of the students and teachers – his friends – who knew him and loved him."  Mr. Read was a beloved and admired member of the staff, who had served as principal of Dover and then Westlake High School from 1926 until his death.

Growing pains are not necessarily painful when it involves growth of your small community. By Dec. 18, 1957, Westlake Village had grown in enough population to be incorporated as a city, finally passing the 5,000-resident mark. From that point forward it was officially referred to as the City of Westlake.

In the late 1950s, some longtime residents began to think forward to the city's upcoming 150th birthday. The decision was made to hold a birthday party during the summer of 1961. The celebration stretched over several days and included a frontier ball held in the Dover School cafeteria. Recently, a stash of old-fashioned bow tie souvenirs from that event were uncovered in the attic of the Clague House Museum. The black clip-on ties, with "Westlake Sesquicentennial 1811-1961" printed in gold, are available for purchase for $5 from the Westlake Historical Society. If interested, call Dave at 440-721-1201.

Following the city's sesquicentennial in 1961, it was decided that the money left over from this celebration should be used to start a local historical society. In 1967 the society began exploring the use of the old Clague House as a home for the new organization. Prior to the historical society taking residence, the Clague House was rented to as living quarters to individuals and then to the YMCA. The Bay Players also shared this building for several years until they were able to make the Clague family barn into the intimate Clague Playhouse theater. The rest, as they say, is truly history!

President of the Westlake Historical Society