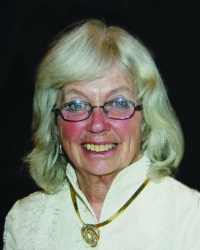 Doris Gorgas has been named the 2014 Bay Village citizen of the year by the Bay Village Community Council.

Gorgas, who is a retired University Hospitals operating room nurse (she still helps teach CPR there), was honored for her 40 years of service to a wide variety of Bay Village organizations, from Girl Scouts to the band boosters to the historical society to the Daughters of the American Revolution (DAR).

“Her community involvement has been evident for the past 40 years,” a nominator wrote. “Doris distributes thank-you notes to veterans during the Memorial Day parade. She works to erect American flags on homes throughout town. She helped raise money for the cemetery fence. As a member of the garden club, she volunteers for fall and spring community cleanups. Doris is an example for all of us to follow; she is a citizen of every year.”

“I am pleased and honored to have been selected,” Gorgas said. “I really enjoyed doing all these activities because I got to meet more of the great people of Bay Village. I hope I helped a bit. It’s a great city and I hope to continue to serve for a long while.”

The Village Bicycle Cooperative, headed by Jennifer Smillie, was named 2014 project of the year for collaborating with local organizations and businesses to encourage people to use their bicycles more often.

Volunteers at the cooperative repair donated bicycles and sell them back to the community or donate them to local charities. Last year the co-op was able to repurpose 170 bicycles. Some 65 were repaired and sold at a modest profit to help fund the project. Another 64 were donated to various organizations. Of the 64 donated, 31 went to needy families at Christmas through the Salvation Army.

“By making Bay Village a bicycle-friendly community, the co-op enhances the image of the community which helps attract young, active people to live here and encourages senior citizens to stay here,” a nominator wrote.

“We are honored to be selected,” Smillie said. “This would never have happened without all the awesome people who helped like Bob Piccirilli, Patrick McGannon, Carl Gonzalez and Peggy Ludwig. It really is a cooperative. A lot of other organizations have helped us like the Bay Skate and Bike Park and the Green Team. I can’t thank them all enough.”

A reception honoring Gorgas and the cooperative will be held at a time and date to be announced.