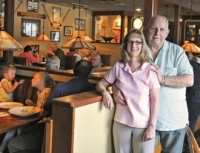 Bay Villagers have come to love Greenisland as our hidden gem, tucked away between a gas station and a dry cleaner on an easy-to-miss side street off Columbia Road. After a rocky start, the Irish restaurant is now in its eleventh year of operation and was recently named as one of the top 100 restaurants in Northeast Ohio.

The restaurant’s unassuming exterior on Eaton Way yields to a cozy, welcoming atmosphere where regulars and first-timers are treated as old friends by owner Sean McConnell – who emigrated from the Emerald Isle in 1973 – and his wife, Connie. The friendly waitstaff are eager to explain the nuances of authentic Irish dishes like boxty and shepherd’s pie to the non-Irish among us, while the menu features more mainstream fare to appeal to a wide range of palates.

From the start, Greenisland’s path to acceptance wasn’t easy. Local residents, concerned about the type of establishment the McConnells had in mind for their quiet neighborhood, protested the restaurant’s opening.

“We put everything we had on the line,” Sean said. The couple persevered through the early opposition, buoyed by a city census that showed strong support by residents for a restaurant in Bay, at a time when local dining options were sparse.

Since opening in October 2003, Sean and Connie have worked hard to assuage those initial fears of a rowdy Irish pub and the traffic and clientele that it would attract.

“So many people have thanked us for opening up in Bay Village and tell us they hope we never leave,” Connie said.

Greenisland has truly come full circle, from an inauspicious beginning to being lauded in a noted food critic’s review and named to a prestigious restaurant list. Calling the restaurant “Bay Village’s best kept secret,” Connie was quick to add that a number of regular customers travel from as far away as Sandusky and Akron.

The family-friendly restaurant is involved in the community, donating gift cards for local fundraisers and hosting civic club meetings, and has been a strong supporter of the Observer, and by extension, the many community groups the newspaper promotes.

“It’s important to us to support the community,” Connie McConnell said. “A lot of our customers live in Bay and we value them and the causes that matter to them.”

Equally welcoming to groups celebrating a family event and those looking to enjoy an expertly poured pint in a mellow setting, Greenisland has made its place as a valuable member of Bay’s dining landscape.