Puttin' on the brakes... 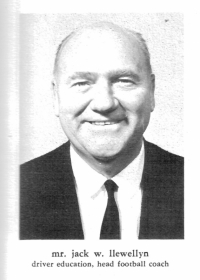 Some WBVO readers learned to drive from longtime head football coach Jack Llewellyn who taught Drivers Education at Bay Village High School when the semester-long course was offered as an elective.

Yes, “puttin’,” with a double “t” and no “g,” as in “Puttin’ on the Ritz.” Did you just drop what you’re doing, grab an imaginary cane, and start tapping away?

Otherwise, you may be relaxing, savoring another sip of coffee, and enjoying “puttin’,” with a double “t,” for a change of pace.

While changing pace, who remembers when “Drivers Education” was offered at Bay Village and Westlake high schools?

WBVO readers, whether retired or approaching retirement age, should answer affirmatively while “Puttin’ on the Ritz” echoes in their minds. Our most senior residents were around in the late 1920s when Irving Berlin wrote this catchy tune, not long before the first high school Drivers Education program was introduced in Pennsylvania in 1934.

Who remembers legendary Bay High School football Coach Jack Llewellyn? He was a Drivers Ed teacher, and a most memorable one, at that. Drivers Ed classes spanning an entire semester offered extensive training and practice to driver trainees.

Not everybody heeded what they learned, particularly when hot-rodding was, well, hot. Yet, for the most part, students received sufficient indoctrination to inspire safe driving habits. This was especially true following the end-of-term “movies,” that some students couldn’t stomach.

Motoring today seems less enjoyable than in decades past. More cars on the road and an apparent increase of distracted and aggressive drivers detract from the joy of driving, particularly in populated areas.

By some accounts “road rage,” was first coined in the ’80s. It’s good thing to avoid, no matter how strong the temptation to tell somebody off. Like keeping a catchy tune in your head, it’s wise to keep comments to yourself ... as justified as they may be.

For example, who hasn’t been traumatized by tailgaters, specifically the driving variety, not pre-game partiers?

Although most tailgaters avoid rear-ending the car in front, they create potentially hazardous situations and distract the driver ahead. Tailgaters are a major source of aggravation to fellow motorists.

Understandably, following slowpokes can be frustrating, but frequently drivers observing posted speed limits are being tailgated. Tailgaters are truly the scourge of our nation’s highways and byways.

Who among us doesn’t wish that police would appear on the scene when the driver behind is virtually counting our neck hairs? How great it is to see tailgaters pulled over and cited!

Even without police, we occasionally get our comeuppance. It happens after being overtaken (including watching tailgaters cross double yellow lines to do so), only for us to pull up immediately behind these offenders at the next traffic light! So how much time did these tailgaters save? Does Daddy Dewdrop’s refrain, “Chick-A Boom, Chick-a-Boom” come to mind? Don’t WE just love it??

Life catches up in the rearview mirror quickly enough. Finding peace and happiness in each waking hour surpasses all other gains. So, what do you say, tailgaters? Why not find a positive outlet for your aggression, like tapping to “Puttin’ on the Ritz” and puttin’ on the brakes to aggressive driving habits? Super Duper!