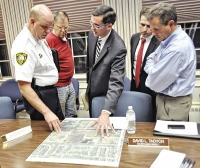 Deer. For many residents of Bay Village, that word elicits an emotional reaction. Some think of damage to their landscaping or remember when a loved one was injured in a deer-vehicle accident and wonder why the city isn’t “doing something.” Others think of the cute fawns in their back yard last spring or remember the joy of feeding them crabapples and wonder how anyone could ever consider “killing these beautiful creatures.”

It’s an emotional issue, but there are facts and research on the matter about which informed citizens should be aware. One way of framing the discussion is to focus on three key questions: Do we have a problem? If so, what should we do about it? Finally, how do we make sure our choices are safe, effective, and humane?

Do we have a problem?

Experts at the Cleveland Metroparks hold that a “deer problem” exists when the number of deer in a given area exceeds the environment’s ability to support them. This includes situations where deer are negatively affecting the environment, as well as situations where deer-human interaction results undesirable outcomes, such as landscape damage or deer-vehicle accidents. Experts stress that it’s all about “environmental balance.”

Cleveland Metroparks and Cuyahoga Valley National Park reported that a population of up to 20 deer per square mile is reasonable in their parks. However, the “environmental balance” in a park differs from a suburb due to differences in forested versus developed space, vehicular traffic and the intended use of the land. The cities of Solon and Mentor decided that a population as low as 10 deer per square mile is reasonable for their communities.

By conducting aerial studies and engaging experts from the Ohio Department of Natural Resources (ODNR), officials determined that the city of Avon Lake contained 196 deer in March 2013 and 222 deer – 13 percent more – in March 2014. This equates to about 20 deer per square mile. Bay Village has not conducted a study to determine the number of deer in our city.

Avon Lake police recorded 26 deer-vehicle accidents in 2013 and collected several carcasses near the road, which police believe may be associated with unreported accidents. On two occasions, a deer has jumped into an Avon Lake resident’s house – resulting not only in property damage, but also psychological trauma to the residents and an inhumane death for the deer. Bay Village police recorded 33 deer-vehicle accidents over the past year.

Residents of Ward 4, bordering Avon Lake, have issued several complaints to city council about the deer damaging their landscaping. This is less common in Ward 1 on the east side of town. This could reflect different realities on each side of town, since deer in Avon Lake may tread into western Bay Village – but this is not certain.

Bay Village should work with the ODNR to determine our city’s deer population, monitor deer-vehicle accident trends and evaluate methods to track and report residents’ deer-related property damage throughout the city.

What should be done?

In July, Avon Lake’s City Council concluded there is an “overpopulation of white-tailed deer within the city” which “negatively impacts public health and safety” and passed an ordinance to permit the culling of deer by archery within Avon Lake under certain conditions.

Landowners in Avon Lake who desire to participate in the program are required to seek a Deer Damage Control Permit (DDCP), from the ODNR. If the ODNR concludes that “actual and substantial” property damage has occurred as result of deer, it may issue a DDCP. The DDCP may include situation-specific restrictions.

Owners are then required to seek a Municipal Deer Control Permit (MDCP) from the City of Avon Lake. The applicant must provide, among other things, a map documenting the location from which shooting would take place (e.g., a fixed location in a tree-stand 10 feet above the ground to ensure downward shooting for safety in the event of a missed shot), angles from the shooting location limiting the directions a shot may be taken, the names and contact information of all shooters and proof of each shooter’s licensing and educational requirements.

Finally, the Avon Lake Chief of Police will consider the totality of the application, the characteristics of neighboring properties and any issues brought forth by residents to determine whether or not to issue the MDCP. He may also place additional restrictions on the permit after inspecting the proposed location.

On Sept. 16, members of Avon Lake’s and Bay Village’s city councils met in a public meeting to discuss Avon Lake’s new ordinance. Preliminary discussion about whether or not to consider implementing the program in Walker Road Park was also held.

Although Walker Road Park is in Avon Lake, Bay Village and Avon Lake jointly own the park. Therefore, if the two cities would like to jointly apply for an Ohio DDCP and an Avon Lake MDCP, they may do so. Neither city may act unilaterally. Neither city has decided to take action yet.

There are myriad safety concerns to be considered. For example, the park would need to be closed, barricaded and monitored since there are many points of entry. Residents would need to be notified by mail. Only professional sharpshooters hired by the city should be permitted to conduct the program. Residents, elected representatives, wildlife experts and public safety officials must take part in the discussion. Public meetings must provide the forum.

Ultimately, the best course of action may be to wait and see what effect Avon Lake’s new ordinance has on the deer population without permitting it to be implemented in Walker Road Park.

How do we make sure our choices are safe, effective and humane?

People continue to move into Avon Lake and Bay Village. Land is developed, traffic increases, deer-human interaction evolves and the “environmental balance” shifts. Residents can use repellents, erect barriers or install landscaping known to be less desirable to a deer’s palate. However, these actions do not have any effect on the deer population.

Wildlife experts and researchers have studied multiple methods to address deer overpopulation, including contraceptive programs, trapping and relocating, and shooting.

Ohio's administrative code bans implementation of a contraceptive program to manage deer population outside of scientific research. Avon Lake attempted to work with Tufts University to this end, but the ODNR required that Avon Lake exhaust all other methods of deer population management first. Concerns related to this option include cost, since contraceptives are only effective in deer for one to two years, and the risk that a heavily hormone-treated deer may end up in the human food chain during hunting season.

Trapping and relocating subjects deer to the risk of duress, painful injury and death. Clover traps, a popular mesh-sided trapping device, have been found to result in the death of 1 in 5 trapped deer, often as a result of the deer harming itself while attempting to escape. Further, researchers have found that up to 75 percent of relocated deer die within one year of transplantation, often due to a lack of familiarity with food sources and predators in the new environment.

Since 1998, the Cleveland Metroparks have employed experienced and trained teams of law enforcement officers (rangers) who shoot with firearms, often resulting in near-instantaneous death of the deer. The venison is typically donated to the Cleveland Food Bank. Researchers have found that experienced hunters using modern archery equipment to hunt white-tailed deer hit their target 89 percent of the time.

If one considers “suffering” to be level of pain experienced multiplied by the length of time pain is experienced, then deer dispatched by professional sharpshooters are less likely to suffer as much as deer killed in deer-vehicle accidents or deer which are trapped and relocated. In this frame of mind, active deer population management may be considered more humane than taking no action – particularly when the human safety and property damage concerns of deer-human interaction are taken into account.

As a community, we should determine if we have a deer problem, decide what to do about it and ensure our choices are safe, effective, and humane. Do your own research, develop your own opinions and engage your neighbors in conversation to understand their perspectives. Contact your local elected representatives to express your views and watch for announcements of public meetings to learn more and ensure your voice is heard.

Tom Henderson is the Ward 4 representative to Bay Village City Council. He can be reached at thenderson@cityofbayvillage.com or 440-385-7268. Opinions expressed in this article are his own and do not necessarily reflect the opinions of any other member of city council.