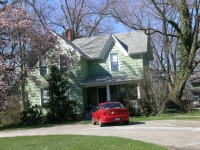 The William Mitchell house on Center Ridge Road in Westlake was constructed in the late 1800s.

The Westlake Historical Society was recently requested by the current owner of 24102 Center Ridge Road, Dr. Marvin D. Shie Jr., to research his home to determine if it is a century home. Dr. and Mrs. Shie purchased the home in 1955 from Lucy and Harry Hoag.

We have determined that this gable/wing farmhouse is certainly certainly more than 100 years old, and thus a century home. It was most likely constructed in either 1871 for William Mitchell or 1882 for William and his wife, Margaret. William was born in England in approximately 1836, Margaret in Ireland in about 1845.

According to a deed recorded on Jan. 11, 1865, Amos Ransom Sperry and Rachel Sperry (husband and wife) sold “as supposed about 97 acres of land” in O.L. 59 “(subject to lease of land for a school house)” to William Mitchell.

According to May E. Weston's “The First 100 Years of Dover Schools,” published by the Westlake Historical Society in 1969, the Mitchell family once lived in the house owned by Dr. Shie in 1969. May Weston states that her second and third grade teacher boarded with the Mitchell family. Also according to Miss Weston, “Aunt Maggie Mitchell” was what Mrs. Mitchell was always called, and she always had a treat for the school children. On page 12 of this same publication she states that William Mitchell, a bachelor from England, came to this country and in 1870 married the widow Margaret Flynn, who had two red haired daughters, Mamie, 4, and Katie, 2.

Actually, William and Margaret married in 1877 according to a Cuyahoga County marriage record.

This is the same William Mitchell who purchased land from Amos Sperry, as noted above. An 1874 map shows what was later known as “Mitchell School” on one acre diagonally across the street from what could possibly be the current house, the subject of this article, on 110 acres owned by William Mitchell.

The Cuyahoga West Chapter of the Ohio Genealogical Society published “Maple Ridge Cemetery, Westlake, Cuyahoga County, Ohio: A History of its People and Families” in 2003. It was edited by Jeanne B. Workman, who provided me information about Maggie and William Mitchell found on pages 48-49 of this publication. In 1849 Margaret Griffin (the future Mrs. Mitchell) came with her parents from Ireland. She married John Thomas Flynn, born in Maryland, a Civil War veteran, who died from his war injuries in Dover Township, in 1869. Margaret then married William Mitchell.

Margaret  and both husbands are buried at St. John’s Cemetery on Woodland Avenue. Her daughters were Mary Agnes Flynn, Katherine Flynn, Mrs. Ellen Wilson and Lucy Hoag. William died in 1891 and Margaret died at 96 years on Nov. 23, 1940.

The home was sold to Margaret’s daughter Lucy and son-in-law Harry Hoag on March 1, 1910. Margaret E. Mitchell and Katherine Flynn are listed as sharing a home with Lucy and Harry and their infant son Willis in the 1910 U.S. Census. Margaret and Katherine were still living together in the 1930 and 1940 censuses. The 1940 Census lists them as occupying 24102 Center Ridge Road, shortly before Margaret’s death.

As stated above the Hoags sold the home to the Shies in 1955, therefore it has only been owned by two families in its 132-year history.

The Westlake Historical Society offers a plaquing program for century homes in the city. Application forms can be obtained with a call to the Society at 440-808-1961 or with an email to westlakehistory@yahoo.com. A $50 application fee defrays some of the cost of doing the research to determine if the home is 100 years old. If it is found to be a century home, the applicant is notified and is eligible to purchase a personalized plaque with the approximate construction year from the Society for $75.