Pen pals for 70 years and counting 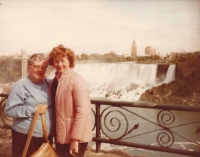 In the spring of 1945, World War II in Europe ended with Germany's surrender. That year, the Cleveland Press began a Worldwide Pen Pal Club for kids. We chose the country, the paper matched us by age and gender. I wrote first and Annette, who'd signed up for her friend in school, answered. We were 13. It's now the spring of 2015, we're in our 80s and still puttering along!

We write about three times a year, our personalities meshed and I attribute these two factors for the longevity of our friendship.

Bundles for Britain, a program started in the United States, to help the British people get back on their feet, asked Americans to send packages of needed supplies and canned goods to a designated distribution point. My mom chose to send our bundles to Annette's family, which began a friendship between our moms.

In the 1950s both of us married and had children. At some point I phoned Annette for the first time. Overseas calls were very expensive but it was wonderful to hear her voice. It added a whole new dimension to our friendship.

A Canadian man, Freddie Laker, founded Laker Airlines, the first airline priced so average people could afford to fly from Canada to London's Gatwick Airport during the warmer months of the year. In 1978 I was able to fly to England to meet Annette and her husband, Frank, for the first time.

On a sightseeing drive through tiny English villages I noticed in every little town's shopping district a shop sign reading Turf Accountant. Finally I asked, "What kind of shop is that?" Annette and Frank laughed then told me it was a bookie joint. Betting on the ponies is BIG in England.

Frank has been a great supporter of our friendship. He's planned our travels throughout England and Wales and arranged bus tours from England to France via the Euro-Tunnel. We spent a weekend in Paris. In the courtyard of the Louvre Museum's palaces built in the 1200s stands a futuristic glass admissions building designed by architect I. M. Pei, designer of Cleveland's Rock and Roll Hall of Fame. Unbelievable! Our second trip was a narrated sightseeing boat tour on Germany's Rhine River.

Annette and Frank visited me twice. Annette wanted to see Niagra Falls so we took the Maid of the Mist excursion. Poor Annette was frightened by the power of the falls but she soldiered through. We also visited Toronto, Michigan, historical Ohio and Gettysburg.

On our next trip we drove to Virginia to see early American history. We entered an apothecary shop where a colonial re-enactor warned Annette not to tell anyone she was English because she could get killed!

While riding in the car Annette kept repeating, "It's so VAST." She confided: "I always thought Americans were lazy because they drive everywhere but now I understand!" England is about the size of New York state.