'Houdini' cat a master of escape 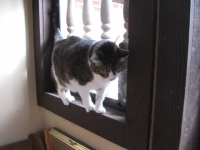 "Toetu the Houdini cat" in the vestibule window, looking for another angle of escape. Photo by Malcolm Wood

When Toetu came to live with us, we had no inkling that she was an escape artist. She liked to play in the front entryway where she could look through the screen door at the outside world. While looking at the outside, she was dreaming on how she could be part of the outdoors. Imagine our surprise when we discovered her wandering down the driveway in front of the garage.

How had she managed to get out of the house when all the doors were locked? Mystified, my husband called her name, scooped her up and brought her back in the house. Twenty minutes later, we were surprised once again to see her outside smelling the bushes alongside the driveway.

Now we were really dumbfounded, how had she managed to escape again? Was she a witchy cat with magical powers or Houdini reincarnated performing his great escape one more time? Pondering all these thoughts, we got Toetu back inside. Desperate to find her secret escape route, we checked her last known whereabouts indoors. It became abundantly clear how she escaped when we noticed the outside mail chute door was raised and we could see a clear way to the outside. Toetu had managed to push her way out through the mail chute door using her head, not once, but twice.

My husband quickly put an end to her escape shenanigans by blocking the inside mail chute opening, thus thwarting any new Houdini escape ventures.