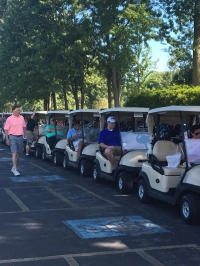 Aug. 8 turned out to be a picture perfect day for golf for the members of the West Shore and Fairview Park chambers of commerce. This year's event, benefiting the scholarship funds for the Westlake, Bay Village and Fairview Park school districts, was held at the Avon Oaks Country Club.

Since 1979, the West Shore Chamber has been supporting the school district education fund through their golf outings. Five years ago they joined forces with the Fairview Park Chamber to hold a joint annual event to fund a college scholarship for three students. The school districts served by the chambers – Westlake, Bay Village and Fairview Park – each receive a donation to their education fund in order to offer scholarships. Tens of thousands of dollars have been donated over the last 35 years.

Bay Shore Insurance took on the job of Beer Hole Sponsor and owners Judie Cunningham and Nancy Kelly spent the day meeting all of the golfers while working the hole themselves. Dave & Buster's served as witnesses on the Hole in One contest and offered a prize wheel opportunity to the waiting golfers.

The winning foursome was headed up by Spooner Inc.'s Andy Lembach and his partners Brady Aldinger, Steve Pappadakes and Alexander Hahn.