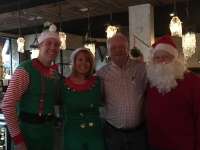 Burntwood Tavern in Crocker Park has a very giving relationship with Cleveland Clinic Children's Hospital. It wasn't enough to make a donation to the Clinic for every gift card that is sold this holiday season; they also held a special night of guest bartenders to give more.

Crocker Park's vice president, Tina Roberts, and their marketing director, Dan Crandall, joined the West Shore Chamber of Commerce's executive director, John Sobolewski (aka Santa), as the guest bartenders for the Dec. 8 event. All tips brought in during the two-hour event went directly to the Children's Hospital fund.

Many chamber members attended as well as Burntwood's regular customers to pack the bar with generous patrons. Santa and his elves were able to raise $250 in that short time while entertaining the guests with their holiday costumes.

Burntwood's marketing manager, Jen Leonard, said, "We are so glad we can give back and support the Children's Hospital in this way."