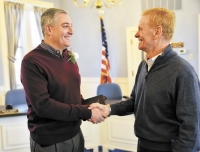 Bay Village’s extended mayoral transition came to a logical conclusion on Jan. 1, when Paul Koomar was sworn in as the city’s 22nd mayor. Koomar, who has served as City Council president since 2011, was first in line under the city charter to succeed former Mayor Deborah Sutherland.

Most on City Council and in the administration were taken aback when Sutherland announced her retirement last September, setting off a scramble to maintain stability during the transition. Koomar expressed interest in taking over as mayor, but cited professional obligations that prevented him from making any immediate decisions.

Law Director Gary Ebert was appointed interim mayor by City Council on Sept. 6, 2016. At that time, Koomar left open the possibility that he would eventually accept the position of mayor. “Right now my work commitments, as I consider this position, would be in effect on Oct. 1 when I would leave to be mayor,” Koomar said during the City Council meeting that evening. “I’ve got to continue to look at that but the city’s got to operate and continue to move forward. We need to make sure that the city finishes strong this year.”

Koomar, 56, will now complete the remainder of Sutherland’s term, which ends Dec. 31. He plans to seek election to a full, four-year term this November. Gary Ebert has resumed his duties as Bay Village’s law director.

Ebert is one of the city’s longest-tenured employees, reaching the 30-year mark last June, and filled in as mayor in 2000 following the resignation of former Mayor Tom Jelepis. During his most recent go-round in the mayor’s office, Ebert quickly announced plans to continue moving forward on current projects and bring new energy to others that had stalled or fallen out of favor. At the top of the list were infrastructure improvements, library relocation discussions, a part-time animal control officer, Community House renovations and a renewed commitment to a team approach between the administration and City Council.

“I’m looking forward to going back to being law director,” Ebert remarked during Koomar’s inauguration. “These last four months have been interesting, I’ve enjoyed it. I’ve communicated with Paul and Dwight [Clark, vice president of Council] everything that I was doing so there weren’t any surprises going forward and I’m sure that a lot of things that I started to implement will be continued on next year and the year thereafter.”

Koomar and Ebert worked closely during the past four months, ensuring a smooth transfer of power. In an interview following his inauguration, Mayor Koomar expressed his intent to continue the progress made during the transition. Listing his top three objectives upon taking office, Koomar said, “Infrastructure and planning improvements will continue to be a priority. Solid financial management I think is extremely important for the city, bond ratings and things like that. And transparency in government.”

Koomar has served on City Council since 2000, when he was elected as the Ward 2 representative. He successfully ran for Council President in 2011 and was re-elected in 2015. He is a certified public accountant and ran a health care consultancy that he is shutting down to focus on the full-time responsibilities of mayor. He and his wife, Therese, moved to Bay Village in 1989. They have two daughters: Jennie, 13, attends Bay Middle School; and Katie, a 2015 Bay High grad, is a sophomore at the University of Findlay.

With Koomar’s rise to mayor, the Council president seat is now vacant. The charter provides that City Council shall select one of its members to serve the remainder of the term. Councilman-at-Large Dwight Clark and Ward 1 Councilman David Tadych submitted their names to their colleagues for consideration. In the event of a deadlock or Council inaction, Mayor Koomar may appoint the next president of Council.