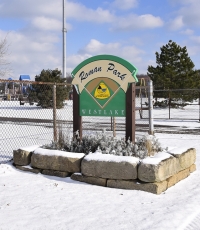 Westlake's Roman Park is located on Ranney Parkway, between Bassett and Cahoon. Photo by Tara Wendell

In Roman Park on Ranney Parkway in Westlake, visitors enjoy a playground, concessions and three baseball fields. Originally called Ranney Park, it was renamed in 1998 in honor of the late Alexander R. Roman, former mayor of Westlake.

Alexander Roman had a long career serving Westlake and Cuyahoga County. He became a member of the Civil Service Commission in 1958, went on to serve as a secretary and chairman, and was elected mayor of Westlake in 1965. He was also a member of the Northeast Ohio Areawide Coordinating Agency (NOACA). In July 1980, he resigned from his position as mayor to become a judge of the Cuyahoga County Common Pleas Court.

Shortly after his resignation, Westlake City Council commended him for his leadership and accomplishments. Mayor Roman’s tenure was marked by growth and development of the city, particularly in improvements to safety services and recreation facilities. Notably, the city received federal grants that provided funds for a sanitary sewer program; participated in the founding of the Westshore Enforcement Bureau; and, in 1969, purchased its first ambulance. Roman was also known for supporting local charities and, in 1975, creating a Bicentennial Committee in preparation for the upcoming bicentennial of the United States.

While these contributions to security and infrastructure are clearly crucial to the city, Mayor Roman’s most readily visible accomplishments may be in Westlake’s parks. He supported the creation of facilities in Clague Park, including its swimming pool, which opened in 1967 and was largely funded by local donations. He also secured Westlake’s usage of Tri-City Park, shared with Fairview Park and Rocky River; and he supported the establishment of the facilities that would, not long after his resignation, become Ranney Park.

In a fitting tribute to Mayor Roman, the Westlake City Council changed the name of Ranney Park to Roman Park, as well as naming Roman Road in Clague Park, in 1998, after his death.

Denise Rosenbaum contributed to this article.

I grew up in Maine, where I completed an English degree and volunteered at a local history museum. I moved to Ohio from Washington, where I did volunteer work as an editor.

Read More on Beyond the Name