An old name in grocery shopping once called Westlake home 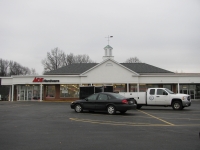 The E&H Ace Hardware store on Detroit Road started out as one of the A&P supermarket chain's colonial-style "Centennial" stores which were constructed from the late 1950s into the '60s.

The Great Atlantic and Pacific Tea Company. While to some that might sound like a new upscale boutique tea shop, others may recognize it as the full name of the old A&P supermarket chain.

Area grocery shoppers once had the option of patronizing an A&P store in Westlake. That A&P occupied a brick colonial-style building located at 27255 Detroit Road, on the southwest corner of Detroit and Dover Center roads. The same building is now home to the E&H Ace Hardware store. Being that same Ace Hardware store was mentioned in the Jan. 10 Observer article I penned recalling past and present Westlake / Bay Village lawn mower maintenance hot spots, this is a sort of follow-on to that piece.

Because the first ad I could find in the Plain Dealer archive listing an A&P at 27255 Detroit Road ran in the June 18, 1964, issue, and a want ad in the May 11, 1964, issue sought help for the “new Union Commerce Bank office” in a wing attached to the east side of the store, I believe A&P opened for business at that location in 1964.

The building was constructed as a “Centennial” style A&P supermarket, introduced by the chain in the late 1950s to help celebrate the company’s 100th year of doing business in 1959. Contrary to the rather bland exterior design of earlier A&P stores, that architectural style is said to have taken strong design cues from 18th century colonial Virginia. Many Centennial-style A&P stores were built in greater Cleveland, and throughout a number of states, and went on to house a wide variety of businesses after their original A&P occupant inevitably vacated the premises.

The last grocery ad listing an A&P at 27255 Detroit Road I could find in the Plain Dealer archive ran in the June 1, 1972, issue. The last A&P ad of any sort I could find ran in the March 21, 1979, issue of the paper. This coincides with my recollection that the A&P supermarket chain left the Cleveland area market around the late 1970s.

After A&P vacated their Westlake store several businesses later occupied it. Discount Drug Mart called the building home for many years before moving across Detroit Road in a store built by the chain. The first archived ad I came across listing Discount Drug Mart in the old A&P location ran in the Feb. 19, 1976, Plain Dealer. A Tuesday Morning store occupied the building for a while before current occupant E&H Ace Hardware spruced up the place and moved in.

As a youngster in the '60s and early '70s tagging along on grocery shopping trips, for some reason I particularly noticed the off-white and gray-green linoleum tiles alternately applied to the A&P store’s floor. About 99 percent of the grocery shopping for my family took place at Lawson’s (on the west side of Dover Center Road in a long, narrow building north of West Oviatt), Heinen’s or Kroger's (which used to anchor what is currently the Dover Junction plaza) in Bay Village and the A&P in Westlake, with an occasional foray to the West Side Market filling the balance (and always including a mandatory stop at Simmelink’s dairy products stand).

Of all the Westlake / Bay Village grocery stores at which we shopped, only Heinen’s still exists as a supermarket. At least the old colonial-style A&P building carries on to be a place to do business.