The history of Detroit Road: From stumps to planks 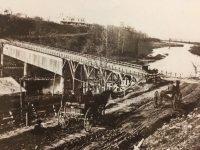 Construction began in 1849 on the Detroit Plank Road bridge spanning the Rocky River. It was built to replace a "rickety" old bridge built in 1820. This picture is displayed at the Rocky River Public Library.

Part one in a series about Detroit Road.

According to "A History and Civics of Dover Village" written by Hadsell and Rutherford in 1930, Detroit Road follows the shoreline of an ancient lake known as Lake Warren. At different geologic times lakes have formed four different cliff-like ridges at what today is Butternut Ridge in North Olmsted, Center Ridge and Detroit roads in Westlake (known as Middle Ridge and North Ridge roads in the early days) and Lake Road in Bay Village.

Hadsell and Rutherford go on to say that both Lake Road and Center Ridge were used as Native American trails (other sources say Detroit Road was an Indian trail as well) and that the early Euro-American pioneers used the ridges as the earliest roads. Stumps were left in place and the authors go on to say that there were people alive in 1930 who remembered when the main “highways” were rows of stumps. They also say that as the number of pioneers increased the number of stumps decreased to create more desirable dirt roads. Unfortunately due to our climate the dirt roads were often mud roads.

With the abundance of timber in the area the earliest solution to the problem of mud were so called “corduroy” roads, they were “paved” by cutting trees into logs and laying the logs perpendicularly across the dirt road. The problem was that the level of comfort in travel was not much improved over the bone-jarring travel across stumps! The best source of information for early Detroit Road is "The Lakewood Story" written in 1949 by Margaret Manor Butler. She states that parts of Detroit Road were once a corduroy road. She also states that as early as 1809 the state government had voted funds for a highway from Cleveland to Huron, known for a long time as the Huron Post Road. She states that trees were felled along the Detroit Indian path so that it was possible for a wagon to pass and that the stage coach from Cleveland began around 1820.

Mrs. Butler was a very active historian and preservationist in early 20th century Lakewood. She was instrumental in preserving what is known today as “The Oldest Stone House” which was moved to Lakewood Park. It was once located on Detroit Avenue in Lakewood (note that Detroit is known as “Avenue” in Lakewood and “Road” in Rocky River and Westlake).

John Honan constructed “The Oldest Stone House” in 1838. He had a daughter, Belle, who married Orville Hotchkiss; they lived together in the house. It was Mr. Hotchkiss who had the contract for building the next innovation in “paving” for Detroit Road – planks!

Mr. Hotchkiss had a sawmill at Detroit and Belle in Lakewood (Belle Avenue is named for his wife). He supervised the cutting of huge oaks near today's Lakewood Park to construct the road. According to Butler the Plank Road extended from West 25th Street to five miles beyond Rocky River. This places the end point at approximately the intersection of Dover Center and Detroit roads in Westlake.

The Rockport Plank Road Company was incorporated in 1848 and construction on the road began in 1849. In 1850 the Ohio Legislature passed a bill authorizing the commissioners of Cuyahoga County to loan money to enable the Rockport Plank Road Company to build a bridge over the Rocky River. The loan amounted to $6,000. This bridge was built to replace an earlier bridge that had been constructed in 1820 primarily by Captain Rufus Wright, the owner of a tavern on the west bank of the Rocky River Valley where the bridge crossed.

A clipping from the Cleveland Herald newspaper at the time reads: “Every person who has risked life and limb by crossing the rickety old bridge at the mouth of the Rocky River, will be pleased to learn that the Rockport Plank Road Company is about to erect a substantial bridge near the site of the old one on the plan of the railroad bridge over the Cuyahoga, grade the heavy hills, and extend their beautiful plank road another five miles this season. This will take it across the Rocky River, over the almost impassable mud road along the bank between the ridges, and some three miles beyond. It is the common remark of people that they feel as though they had reached the city the moment they strike the planks!”

Tolls for the new bridge crossing amounted to 7 cents for a one-horse outfit, 10 cents for a team, and 15 cents for a double team.

Farmers in Dover and Rockport townships grew weary of the tolls and after a number of years of paying them The Sentinel newspaper printed an article which ended: “With a call for citizens of Rockport and Dover to turn out en masse to right their wrongs. The course to be pursued was to be such as should seem best when so gathered together, but it was pretty generally talked about that the course to be pursued would be to proceed by force and remove the gates from the road.”