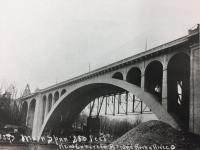 An old postcard shows the 1910 Detroit Road Bridge over the Rocky River in the foreground. Immediately behind it is the 1890 iron bridge that it replaced. Sandstone abutments of the 1890 bridge can still be seen in the river.

Part two in a series about Detroit Road.

The first westward settlers traversing what became Detroit Road had to swim, wade or ford the Rocky River until a ferry service began in 1810. In 1820, Captain Rufus Wright, the owner of a tavern located where the Westlake Condominiums are now, took the lead in constructing the first bridge to cross the valley. According to "Rocky River Yesterday" by the Rocky River Historical Society, due to the capsizing of two stage coaches on the bridge in 1842, this low wooden span, which hung just above the flood-plain, was deemed unsafe due to deterioration and there were calls to build a new bridge and plank the road to improve travel conditions.

George A. Christensen wrote in "Incidents & Episodes: Tales of Rocky River and Rockport Township, Ohio" that the replacement wooden bridge, built in 1850 at a cost of $6,000, was constructed of oak timbers in the important parts of the structure, yellow pine, fir or ponderosa pine in the decorative area, with abutments of sandstone and a deck that was 24 feet wide. According to Christensen, the location of the mud ramp on the west side of the river came up behind the Westlake Hotel (now Westlake Condominiums) in Rocky River. He also says that the bridge was approximately halfway between the height of the water and the height of the natural grade on either side of the river.

It is unclear why the ramps down the hillsides were not covered with planks – perhaps they would have been too slippery on a grade? "Rocky River Yesterday" suggests that they were planked and that by 1852 the road between the cities of Cleveland to Detroit was completely planked.

The 1850 bridge was replaced with a $60,000 iron bridge in 1890. The iron bridge was at street level with a 28-foot-wide oak deck which accommodated inter-urban, vehicular and pedestrian traffic. It was replaced in 1910 by a $220,000 concrete bridge. Some of the sandstone bridge abutments for the iron bridge can still be seen in the river. When constructed, the 1910 Rocky River Bridge was the longest unreinforced concrete single span in the world. The soaring center arch spanned 280 feet and was framed with two 44-foot arches. It had 40 feet of roadway and 8-foot sidewalks on either side. It carried two inter-urban tracks and two lanes of automobile traffic.

By the 1960s the bridge had begun to seriously deteriorate. In 1981 all but the west 175 feet of the 1910 bridge was demolished after construction of a new $4 million standard highway bridge. The 1910 bridge lives on as the foundation of the “Bridge Building” and in the official seal and logo of Rocky River and on the Downtown River district markers.

According to Robert Parry, the former planning director of the City of Westlake, the Downtown River/Old Detroit Road area of Rocky River would be a very different place today if a powerful former county engineer, Albert S. Porter, had gotten his way. Porter proposed replacing the 1910 Detroit Road Bridge in its same location. This would have meant continuing the dogleg route in front of the Westlake hotel and widening old Detroit Road, destroying the Downtown River shops. As a young city planner working for the Cuyahoga County Regional Planning Commission, assigned to the City of Rocky River, Parry proposed a number of alternates, including the one that was built. It relocated the west end of the Detroit Road Bridge southward with a gradual sweeping curve, bypassing the downtown and saving the older blocks of buildings.