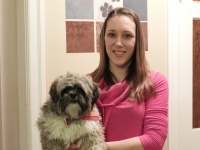 Westlake's Cutest Pet for 2017, Iggy, and her owner, Sarah Howard.

The Westlake Historical Society is happy to announce the winner of our 2017 Cutest Pet Contest: Iggy, a 2-year-old Shih Tzu. She was adopted from the Toledo Area Humane Society as a puppy and moved to Westlake with her owner, Sarah Howard, in 2015. When she was rescued, she was one of 35 Shih Tzus from a hoarding situation in Toledo.

Iggy was born without a tail, and has a 90-pound Aussie Doodle brother by the name of Bentley. They are the best of buddies, though Iggy is the boss. She also enjoys the company of two cats, Max and Louie, but the feeling is not always mutual. Her favorite toy is her pink Lambchop. She simply adores soft squeaky toys. She also enjoys running around the house with empty milk cartons or cardboard boxes. Iggy is a sweet and friendly dog who loves to play, but is also happy to curl up on the couch for a laid back evening at home. Her nickname is "Wiggles."

You might see Westlake's Cutest Pet out for one of her walks on Dover Center Road. She enjoys getting plenty of exercise. I recently stopped by to visit Iggy and to present her owner with prizes that included a cash prize and a photo shoot for Iggy and her family compliments of Skyshore Prints in Westlake. She is looking forward to her duties as the Westlake Historical Society mascot and walking in the Fourth of July parade with other members of the historical society.

Reminder: The Westlake Historical Society education meeting will take place on Thursday, Feb. 23, at 7 p.m. We will meet at the Westlake Recreation Center. Our guest speaker will be Brian Thompson. He will relate his life experiences growing up in war-torn Europe during World War II.

Lysa Stanton is a newly retired teacher and  the president of The Westlake Historical Society. She lives in Westlake with her wonderful husband, Dave and her awesome pets.