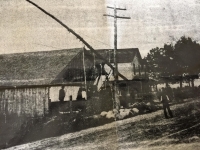 A photo, supposedly taken in 1876, shows a hickory pole-raising in front of the Harvest Home tavern, which is now Dover Gardens. The stable to the left of the building was for horses and carriages of visitors.

Part three in a series about Detroit Road.

As earlier parts of this series on the history of Detroit Road explain, Margaret Manor Butler’s "The Lakewood Story" discusses in detail the construction of a wooden Plank Road from West 25th Street to five miles beyond Rocky River. Construction of it began in 1849 and it lasted for over 50 years as a toll road until 1901 when the gates were removed and the tolls abolished. Butler wrote that it was a great boon to produce farmers who made the trip to Cleveland and that although it eased travel, it had several drawbacks.

One drawback was noise! Butler stated that it was the end of peace and quiet on Detroit with a constant stream of wagons, carts, oxen and horses, clumping and creaking over the planks very early in the morning and making the same noise on the return trip later in the day. Sundays brought a steady stream of carriages from Cleveland, with the occupants enjoying an early version of the “Sunday drive.” The other drawback she mentioned was the increase in the number of taverns and the sale of alcohol along Detroit. Farmers returning home after a day at the market would stop for refreshment and if they stayed too long after dark would spend the night.

One of those taverns built in this era was called Harvest Home, the current Dover Gardens building, at 27402 Detroit Road. A picture found in the Westlake Historical Society files puts the date of construction to 1876 or before. According to a recent article in the Plain Dealer this would make it the oldest existing bar in the Cleveland area, besting the Harbor Inn tavern in the Flats that was constructed in 1895.

"The Lakewood Story" discusses a curious event which occurred during 1876 on the Plank Road. Republicans in Rockport Township constructed a “magnificent” 135-foot-high flagpole in front of the Patchen House tavern (which was located at the site of today’s Westlake Condominiums in Rocky River), complete with a dedication speech by J.L. Hay (who may have been related to Clevelander John Hay, Republican President Abraham Lincoln’s former private secretary). A 13-story flagpole in the midst of two-story buildings of the day would make quite a statement!

The picture found in the Westlake Historical Society files was provided by a Mrs. Josephine Potter who had once lived above the Dover Gardens tavern, and who in 1980 provided the picture to the Society. It accompanied an article about “Grandpa Brenner” with the handwritten statement that the picture possibly shows another curious event, the raising of a hickory pole, supposedly in 1876, to show Brenner’s support for Hayes and Tilden in their campaign for U.S. president and vice president. The article accompanying the photograph describes Brenner as the owner of this early tavern which catered to Clevelanders looking for a fine meal at the end of their carriage or sleigh ride from Cleveland. An 1874 map of Dover Township shows C. Brenner owning a 66-acre parcel straddling Detroit Road with a building labeled as a hotel and grocery on it.

The 1876 presidential campaign actually pitted Ohio Republican Rutherford Hayes and running mate William Wheeler against New York Democrat Samuel Tilden and running mate Thomas Hendricks. A precursor to last fall, it was one of America’s most contentious and controversial presidential elections in American history. Tilden won the popular vote but Hayes carried Ohio and won the election with 185 electoral votes versus Tilden’s 184. The book "The Decline of Popular Politics: The American North 1865-1928" states that during this period Democrats would erect tall hickory poles in support of their candidates (going back to the campaign of “Old Hickory” Andrew Jackson in 1828) and Republicans “liberty poles” with American flags mounted on top of them. So in actuality the hickory pole shows that if it was taken in 1876 Brenner was in support of Tilden and Hendricks and the Republicans of Rockport were showing their support for Hayes and Wheeler.

Suddenly, this homely, double-gabled building on Detroit Road, between Dover Center and Cahoon Roads, takes on a little luster. It more recently gained local headlines when an out-of-control stolen pick-up truck slammed into the building and seriously injured several people in the building. But the old timbers held up and the Dover Gardens recently re-opened and is back in business once again serving patrons traveling Detroit Road.

If in fact Josephine Potter's photograph is from 1876 it proves that the Plank Road ended somewhere east of the Dover Gardens tavern because there are no planks visible in the muddy, rutted, roadbed during the period when the Plank Road was in its prime.

However, the wood utility pole with cross arms in the center of this picture may date the photograph to a later period. Utility poles like this were first constructed to handle telegraph lines in the mid-19th century and became more common during the turn of the 20th century for electric lines so the picture may be later than 1876 and represents the Democratic leanings of Brenner at a later date.