Observed Around the World: A Fair in Tuscany 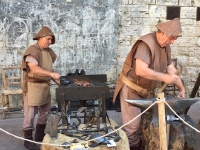 One of the three piazzas is given over to working demonstrations of skills that were a part of everyday life during past centuries.

Every now and then while on the road the truly unexpected can capture you and draw you in to a slice of life not much known outside of the town through which you are traveling. Such was the case while traveling recently in Italy. As we have Bay Days, in June San Gimignano in Tuscany has their Ferie delle Messi, a celebration of their heritage going back over 750 years.

This small village with its medieval wall still standing is divided in to four contrade (neighborhoods) each with its own coat of arms, identifying color and knight. The three-day celebration seems to include the entire population of the village, young and old, who join in the colorful procession dressed in medieval styles (down to their shoes). Competitions between the four contrade include the braiding contest that is actually fun to watch, drumming, tug of war, and a horse race (not as big or famous as the race in the Piazza del Campo in Siena, an hour away).

Known for its wines and beautiful country-side, both of which exceeded our anticipations, the villages and people of Tuscany make that region of Italy especially worth visiting.