Observed Around the World: Tuscany's San Gimignano, a town of towers 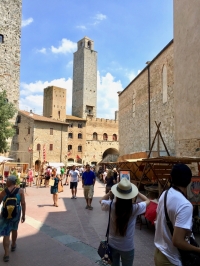 Life wasn’t easy in medieval Italy (400 years before the first permanent U.S. settlement), not even in a province as bountiful and beautiful as Tuscany. That included the life of the nobility. They built tower homes to show their wealth but with war common between the city-states from the 10th through the 14th centuries, the towers also provided safety when the village was attacked.

The town best known for its towers that survive today is San Gimignano in Tuscany. Originally having 72 towers, today it still has 14 towers, one of which is 177 feet high, thus giving it a distinct appearance even from a distance.

The photos show several of those towers as well as some street scenes with a more current appearance.