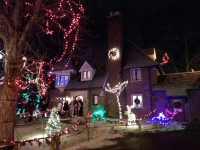 Finwood Estate in Elyria is decorated for Christmas and open to the public. Photo by Rachel Polaniec

This month’s Magical History Tour is at Finwood Estate, located less than 15 miles from the Westlake/Bay Village area, next to Lorain County Community College in Elyria. Information in this article was sourced from the city of Elyria’s web page on Finwood Estate and from Annette Solet, recreation supervisor for the City of Elyria.

From the tangled black mass of skeletal trees lining Abbe Road blazes a multitude of Christmas lights, beginning near the street and stretching back into the surrounding woods. A drive cuts through the trees, snaking its way to the brightly-lit house twinkling merrily through the branches: It's Christmas time once more at Finwood Estate.

Originally built in 1929 as the private residence of common pleas Judge Guy B. Findley and his wife, Finwood Estate is now owned by the city of Elyria and operated by the Elyria Parks Department throughout the year for private rentals. During the Christmas season, however, Finwood's doors are flung open to the public as the property is transformed into a veritable winter wonderland known as Holiday at Finwood. This tradition is in its 32nd year, according to Annette Solet, recreation supervisor for the City of Elyria and prime mover behind the event.

The current displays have undergone a significant evolution from the first iteration, which featured a pine-roped drive, a Christmas tree in the front yard and in the living room, and Santa in the dining room. Today an estimated 300,000 to 500,000 LED lights illuminate the property (the majority of which remain up year-round – a lift is used to get the lights into the higher branches of the trees), along with figures of deer, penguins and other winter creatures.

The outside is primarily done by Jay Horwedel, maintenance supervisor of the Parks Division, with work beginning in August setting up the temporary items, such as the roping and the animal figures. A train display, provided each year by the Shupp Family, winds its way through the front yard. The interior is almost all Ms. Solet’s doing, and is newly decorated each season. She divides the two-story redbrick Tudor home into two sections: the traditional downstairs, with poinsettias, mannequin trees and Santa present every night, while the upstairs is geared towards children and focused around a theme.

“It is funny,” Ms. Solet mused, “I will tell someone I am starting to work on Finwood and they will say, ‘What is the theme?’” This year’s is movies, featuring "Trolls," "Minions" and "A Year Without a Santa Claus."

Apart from that particular room, Santa Claus is very much a presence in the Holiday at Finwood experience. Seated in the living room aglow with the lights from the Christmas tree and sparkling décor, Santa greets every child with a smile, engages each as they recite their wish list, poses for pictures, and sends the happy youngsters back to Mom and Dad with a coloring book and a candy cane for good measure. Santa and the interior of the home will continue to be available through Dec. 23, while the exterior lights will remain on for the rest of the month.

Holiday at Finwood is sure to leave a lasting impression, on both children and grown-ups alike. “I really believe Finwood is that feel-good program that promotes the community and holiday spirit,” noted Ms. Solet, “[Mr. Horwedel and I] want to make sure that we can help people have long lasting memories of the holidays.”

Growing up in Elyria, a visit to Finwood at Christmastime was a must, as both a child and as a teenager. Now, with children of my own, I am happy to be continuing the tradition and passing it on – from generation to generation, from community to community.

Wishing all a Merry Christmas and a Happy New Year!

I live in Westlake with my husband and our two sons. I work part time at Kohl's, and full-time at home. In my free time I like to read, write, and cook. My family and I take part in War of 1812 reenactments throughout the summer. My lofty dreams are of traveling abroad, visiting the great museums, and drinking all the coffee. For now I content myself with antiquing and Keurig sampler packs.