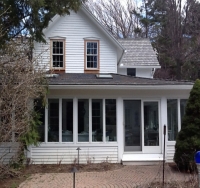 This is Betsey Osborn Williams' farmhouse at 29357 Lake Road as it looks today.

Reuben and Sarah Johnson Osborn purchased Lot 93 from Philo Taylor, the land agent for the Connecticut Land Company, for one dollar an acre. His farm extended from the west at the Sadler property, east to the Porter property, north by the lake shore, and south to what is now the Wolf Road area. (Where the high school is today.) Reuben and Sarah had one son, Seldon. Seldon, an herb doctor, married Nancy Ruple of Euclid Township. They lived at 29059 Lake Road on part of Reuben's acreage. Betsey was the third child and second daughter of Nancy and Seldon, born in 1839.

Reuben gave his grandchildren – Sherman, Reuben, Samuel, David and Betsey – each a parcel of his property to farm. The grandchildren raised berries, fruits and grapes and in a small way raised oats, corn and wheat to supply their own needs. They also fished.

Betsey married Barney Williams on July 22, 1873. She was 13 years older than Barney. Betsey’s portion of Reuben’s acreage was next to the Sadler lands and fronted on Lake Road. Betsey and Barney built a farm house at 29357 Lake Road, close to the roadway and in front of their well. (Example today is the Seldon Osborn house.)

Barney was a farmer. He planted acres of fruit trees, hay and potatoes on this land and other acreage purchased in the township. He kept livestock, horses and chickens. His property was valued at $3,500 in 1880. The village schoolhouse was on the north side of their property on Lake Road.

Barney died at age 43 in 1895. Betsey continued at the farm. Across the street from the farmhouse, on the north side of Lake Road, Betsey built three two-story summer cottages which she rented to visitors vacationing at the lake. Henry Sehnert, minister of the Lake Shore Methodist Episcopal Church, boarded with Betsey and her niece, Mae Mastin, came to live with her. Mae was very helpful in Betsey’s later years when she succumbed to dementia.

Betsey died at age 72 in 1912. When she passed, the property went to Mae. Mae sold the property in 1914 to Sophia Steinbrenner who had summered in the cottages. Sophia and her sisters continued the rental of the cottages as they enjoyed their summers in the farmhouse at the lake.

Henry Steinbrenner obtained the property from his grandmother and moved his family to the village in the 1940s. Henry moved the farmhouse behind the well on the property. A large extension was added to the east side of Betsey's house. The family lived the rest of their lives on the property. Over the years the cottages were sold. Today, one cottage remains, remodeled into a lovely year-round home.