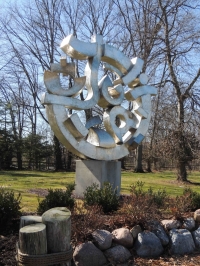 This sculpture by Westlake native Harold Balazs was installed in 2005 at the corner of Hilliard and Dover Center roads.

Celebrated artist and sculptor Harold Balazs passed away on Dec. 30, 2017, in Mead, Washington. He was 89 years old.

Harold was born in Dover (now Westlake) in 1928 and graduated from Dover High School in 1946. While in school he participated in basketball, hockey, volleyball, football, track, and student council. He was president of student council during his senior year.

Harold started art lessons at the Cleveland Museum of Art at the age of 12, and continued them for several years after. He was encouraged in this by his mother, who worked as a telephone operator. His father’s work in sheet metal fabrication and air conditioning repair provided young Harold the opportunity to become familiar with materials he would later use in his art.

After graduating from high school, the family moved to the state of Washington. Harold received a Bachelor of Fine Arts degree from Washington State College in 1953. By this time, he was married to Rosemary Schneider for about three years and they had started a family.

Harold believed that “art should be a thing of wonder” and carried that idea into the various mediums of metal, concrete and enamel in which he worked. His pieces have a bold style and have been integrated into many public buildings, churches and schools. His works are found both internationally as well as in the United States.

In an oral history Harold did for the Smithsonian on Aug. 13, 2012, he fondly recalled his time working on his grandfather’s farm taking produce to market. Harold and his cousin made some extra spending money by selling the berries they picked.

This love of Westlake carried on for his entire life as was evident when I spoke recently with his widow to express the Westlake Historical Society’s condolences. She told me, "He loved Westlake and spoke of it often."

This abiding love of Westlake shines through the “Circle of Life” brushed stainless steel sculpture that stands on the southwest corner of Hilliard Boulevard and Dover Center Road.  His work measures about 16 feet in diameter and was commissioned by the Westlake Westshore Arts Council. It was presented to the City in July 2005.

When one looks through Harold’s family tree, one finds familiar families like Beardsley, Hall, Lilly and Smith.

The Westlake Historical Society’s Outreach & Education Committee are working on a plan to celebrate and honor the life of Harold Balazs. Details on this project and ways that you can help to support it will be forthcoming.

As he always said, ”Time is short, so you better get your brain and hands busy and do good stuff.”

Lysa Stanton is a retired special education teacher and the President of the Westlake Historical Society. She lives in Westlake with her wonderful husband, Dave and her awesome pets.