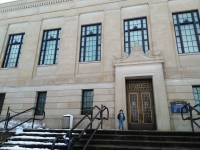 This month's Magic History Tour is the Kent State University Museum, located on the Kent State campus about an hour's drive via I-480 East. The information used in the article was sourced from "A Fine Endeavor: 25 Years of Fashionable Collecting," and the "Fringe Elements" exhibit brochure. Both are available at the Kent State Museum. The Museum is open Wednesday through Saturday to the public, and free parking is available to museum visitors.

The Kent State University Museum began life as a collection of 4,000 dresses, over 1,000 antique furnishings, and 5,000 books belonging to two men – business partners Shannon Rodgers and Jerry Silverman, whose line of women's ready-to-wear was highly popular throughout the 1960s and '70s. Both men were very fond of antiques and avidly collected for their homes. The resulting assortment of first-rate objects was eventually gifted to Kent State, as Jerry thought it should be accessible to students, and Dr. Brage Golding, president of the university, proposed creating a museum and adding a curriculum in fashion design and merchandising should they choose to locate the collection there. They did, and the Kent State University Museum officially opened in 1985.

Twenty-five years after its founding, the Museum boasted 40,000 objects and had played host to a multitude of exhibits, including "Brides, Brides, Brides!" (1986-87), "Chinese Robes and Textiles from the Qing Dynasty" (1992-1993), and "The Right Chemistry: Colors in Fashion 1704-1918" (2004), all brought to life in a wonderful little book celebrating the Museum's 25th anniversary, "A Fine Endeavor: 25 Years of Fashionable Collecting," available in the gift shop.

Obviously, the extent of the collection means only a relatively few of the objects can be on display at one time, however this is in fact ideal given the decidedly delicate nature of the textiles themselves. Unlike a stone statue or an oil painting, textiles must be rotated frequently, making the Museum's large holdings more of an asset than a liability. This is evidenced by the variety of the exhibitions and the rate at which they are changed, with several exhibits coming and going throughout the year.

The Museum is divided into two floors, with the bottom floor hosting the Fashion Timeline in the Palmer and Mull Galleries, the only ongoing costume exhibit in the Museum with continual changing of the garments. It is the best place to start, although there is no official order. Placed near the entrance is an interactive kiosk where one can learn a brief history of the Museum, if so inclined.

The Fashion Timeline begins with the clothing of 1750 and concludes in the 1950s. The timeline itself is on the wall, marking important events in history (such as the French Revolution and the invention of the sewing machine) as well as offering information about the fashions of the periods represented. Informative signs are provided for the individual costumes as well, and include maker (if known), material, and approximate place and date of origin.

The Tarter/Miller Gallery is adjacent to the Mull, holding a variety of glass objects from the collection. Like the Fashion Timeline, the Glass exhibit is ongoing. At the time of this writing some of the selection included Carnival, Czech, and Tiffany glass, as well as offerings from various artist's studios and six pieces originating in ancient Rome. Ohio pottery and a smattering of hats and shoes lined the hallway leading back to the entryway.

In the other wing of the first floor are the Stager and Blum Galleries, whose "Fashions of the Forties: From World War II to the New Look" was on display through March 4, with "For the Birds" opening April 13. Here the hallway was once more utilized, with fashion plates and issues of Vogue magazine taking center stage. The 1940s saw the entrance of the United States into World War II, which was reflected in the clothing worn. Uniforms worn by men and women working for the war effort are centrally placed, while the slimmer silhouettes and changing materials in the clothing located along the walls were in response to war-time rationing.

The Blum Gallery focuses on accessories such as hats, which were not subject to the rationing, and wedding dresses, as an increase in weddings broke out after the bombing of Pearl Harbor, when men and women married before the groom left to serve his country. Christian Dior's "New Look" makes a stunning appearance in the form of a bubbly pink "Venus" ballgown.

Up the double staircase is the Broadbent Gallery, where "Katharine Hepburn: Dressed for Stage and Screen" will be showing through Sept. 2. Early in his career Shannon Rodgers had worked on the costumes for the 1933 film "The Warrior's Husband," starring Hepburn. This is a lovely exhibit, featuring posters and stills from many of Hepburn's stage and film roles, with the costumes she is seen wearing prominently displayed in front. As the earlier films were shot in black and white, seeing the clothing in living color is a real treat.

The second gallery is the Higbee, where "Fringe Elements" can be seen through July 1. This gallery often plays host to exhibits that focus on elements of the clothing themselves ("Inside Out," where the clothing's inner construction was displayed to the public, comes to mind), and Fringe Elements is no exception. Here a variety of clothing featuring fringe can be seen, from the tiered rows cutting across an 1879-80s skirt front to a woven dress that ends in self-fringe (2015). Both Fringe Elements and the Hepburn exhibit have free brochures available to act as both guide and souvenir.

Because the exhibits change with such frequency, the Museum's gift shop is well stocked with brochures and guides from past displays and can often be purchased in bundles. While it can be dispiriting to know that an exciting exhibit or favorite piece will soon be back in storage, visitors to the Kent State Museum can take heart in the knowledge that another excellent exhibit and a different beautiful piece will take their place. All the more reason to come again, and soon.