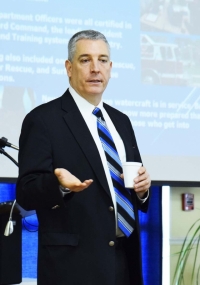 Bay Village Mayor Paul Koomar speaks to residents during his State of the City address at the Dwyer Center. Photo by Denny Wendell

When he took the podium last May for his first State of the City address, Bay Village Mayor Paul Koomar didn’t have much to look back upon. He was five months into finishing the final year of retired Mayor Debbie Sutherland’s term. The accomplishments of the previous year, during which he served as City Council president, mainly belonged to Sutherland’s administration. Koomar’s presentation focused heavily on the future, not the past.

After spending a full year in office and winning election to his own four-year term by a comfortable margin in November, Koomar had a lot more to talk about this year. Addressing a modest audience of Bay Village residents gathered at the Dwyer Senior Center on March 28, the mayor shared the successes of his administration in 2017 and tracked the city’s progress along the roadmap he began to envision those first few months in office.

Among the most important projects finalized last year were the Bay Village Master Plan and the Cahoon Park Connectivity Study. Mayor Koomar often references both documents when outlining his plans for the city. Many of the big-ticket projects on tap are directly related to the recommendations found in those guides:

Last year Mayor Koomar looked at sources of funding used by Bay’s neighboring cities, and found many of them were receiving grants. To fill a vacancy in the law department, the city hired a candidate, Kathryn Kerber, with grant-writing experience who will help seek out and apply for funding.

The city also made some staff changes in the finance and recreation departments, and welcomed three new department heads – Jennifer Demaline in human resources, Jon Liskovec in service and Steve Vogel as chief building official.

Koomar’s administration continues to deal with a tight budget. Income and property tax receipts in 2017 remained flat from 2016, but in recent years the city has lost nearly $1 million from the elimination of the estate tax and a cut in local government funding from the state.

Finance Director Renee Mahoney managed to transfer $750,000 last year to the capital equipment replacement fund, which is used to update city equipment including fleet vehicles like ambulances and snow and leaf trucks. A new citywide phone system was installed at a price of $144,500; annual cost savings of $33,000 are expected.

The city has an annual target of 12,000 lineal feet of road repairs. Last year work was completed in Ward 2; in 2018 the focus will shift to streets in Ward 4.