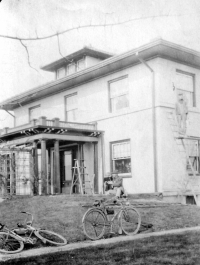 Joseph Waldeck built a stucco house on the south bank of Porter Creek in 1899.

Joseph Waldeck came into Dover Township in 1899. Joseph was the superintendent of the American Steel & Wire Company on East 55th Street in Cleveland. His brother had just purchased a farm in the township where Lakewood Country Club is today, and Joseph considered buying one himself.

Casper Wuebker worked at American Steel & Wire. He lived in West Dover on Bradley Road south of the railroad tracks. He informed Joseph of a farm for sale on Bassett Road. The farm was owned by A.C. and Emma Phinney. The Phinneys had moved to Lake Road on the east end of the township on the lake (Cashelmara today). Porter Creek ran through the property and all told the farm contained 23 acres. Neighbors were Reuben Osborn and the Albers family.

The Waldeck farm was on Lot 83 on the east side of Bassett Road. The first owner of the property had been Caleb Eddy in 1826. At this time, Bassett Road had wide drainage ditches on either side of it, with an iron plank floor bridge across Porter Creek. Joseph built a fine new stucco house on the south bank of the creek behind where the Caleb Eddy house had stood. The address today is 503 Bassett Road. The house was built by Arthur Hagedorn who lived south of him on Bassett Road.

Joseph had a fruit orchard. He began experimenting with tree trimming and tree spraying, uncommon in those days.

Although Joseph was of German ancestry, he was not part of the German community. His children attended West High School in Cleveland. After Joseph sold the house, the Kulus family moved in and lived there through the 1940s and 1950s. The property was split and the two children, a daughter and son, built houses north of the creek. They lived there for many years.