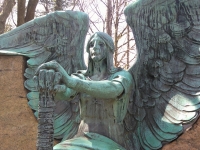 "The Angel of Death Victorious," also known as the "Haserot Angel," is often sought-out by visitors to the Cemetery. She is located in Section 9, Lot 4.

From the hard lines and polished surfaces of Cleveland's East Side rises a rural oasis of gentle hills and swaying greenery, a place of peace and repose, a sanctum from the roar of the city streets below. While the inadvertent visitor might be taken by surprise, Lake View Cemetery has been this way since its founding in 1869, being designed after the grand garden cemeteries of France and Victorian England.

Originally developed five miles from the city in bucolic arboreal surroundings, today the cemetery's 285 acres encompasses tracts of Cleveland, East Cleveland and Cleveland Heights. The expansive grounds host two small lakes, wildlife and a variety of exceptional horticulture: over 750 labeled trees, four of which are Moses Cleaveland trees – trees that were growing when Cleaveland first surveyed the area in 1796.

Nestled into Lake View's hillsides, overlooking its shimmering lakes and sheltered under the graceful branches of its trees are the final resting places of over 109,000 people, including some of Cleveland's most prominent citizens. Recognizable names like Bolton, Crawford, Freed, Hanna, Higbee, Mather, Rockefeller and Sears dot the premises, many of which adorn elegant stones and are accompanied by statuary.

Indeed, the cemetery's impressive architecture is not limited to the immediately recognizable family names, with graceful angels, rounded urns, and stately obelisks found throughout the grounds. A complimentary map details 12 notable resting places, as well as two of the cemetery's highlights: the Wade Family Chapel and the Garfield Monument.

Listed on the National Register of Historic Places, the Wade Memorial Chapel was dedicated in 1901 in memory of Jeptha Wade, the founder of The Western Union Telegraph Company and the first president of Lake View Cemetery. The interior is completely designed by Louis Comfort Tiffany and his studios, one of the few remaining in the world with that distinction. Framing the interior is the theme, "The Voyage of Life," with an ethereal stained-glass window, The Flight of Souls, taking center stage. The piece won a gold medal previous to installation at the 1900 Exposition Universelle in Paris, remaining a highly prized example of Tiffany's famed ecclesiastical work.

On the west and east walls are full-length mosaics designed by Frederick Wilson, constructed by Tiffany Studios in New York and re-assembled in Wade Chapel. The exterior of the chapel was designed by local architects Hubbell and Benes, and executed in a Neo-Classical style, complete with pediment, columns, Ionic capitals and a portico. A guide is present during operating hours, and private tours are available.

Like the Wade Memorial Chapel, the James A. Garfield Memorial is also listed on the National Register of Historic Places, and staff are available for public and private tours discussing Garfield's life and the history of the building. Designed by architect George Keller as a combination of Romanesque, Gothic and Byzantine architectural styles fashioned of Berea Sandstone, the solemn memorial stands 180 feet tall, looking out over the cemetery grounds from a hilltop. It was dedicated on Memorial Day, 1890, as the final resting place of the 20th president of the United States.

The memorial hall is lavishly decorated, resplendent in gold mosaics, colored marble, red marble columns, and stained-glass windows depicting the 13 original colonies, plus the state of Ohio. In the main gallery is a statue of President Garfield, sculpted by Alexander Doyle. Located in the crypt is the president's casket, draped with an American flag, and that of his wife, Lucretia; Garfield's is the only presidential casket on full display.

If one climbs the 64 steps from the lobby to the outdoor balcony, one is rewarded with a stunning view of 40 miles of the Lake Erie shore, with the Cleveland cityscape outlined against the horizon. For all the peaceful reflection that seems to find us in Lake View Cemetery, perhaps no other spot elicits the same level of quiet contemplation as when it is just us alone, suspended above the land, as the wind humming through the air only adds to the silence.

Here in Lake View Cemetery we can find respite from the furious forward march of life, in the gentle embrace of the trees, under the vast expanse of the sky, in the presence of those who have come before.