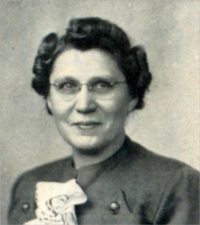 On the third floor of old Parkview School in the northwest classroom with two walls of windows overlooking Cahoon Memorial Park and Lake Erie, Marvel Sebert held court, teaching English to Bay High School students for 36 years. It was the "coolest" classroom in the building. Miss Sebert was greatly admired by her students. She made you understand and enjoy the English language.

The class of 1947 dedicated their Bay Blue Book to her. Here is what they wrote:

"We the senior class of 1947, wish to dedicate this book which means so much to us, to one who has meant even more to us. She has encouraged us when we were troubled, scolded us when we needed a restraining hand, laughed with us in our fun,  assisted all along the way, and has been not only an adviser but a pal. This friend whom we so greatly appreciate is Marvel E. Sebert."

Marvel grew up in East Cleveland, graduating from East Tech High School in February 1917. The June Bug, the East Tech yearbook, states Marvel lived at 10118 Olivet Avenue. She was thinking of attending Western Reserve College. Her nickname was "Mar" and while at school was involved in Palladium, the honor society, commencement speaker, secretary of Rhetoricals, and home room president. Her bio says, “Her eyes are fixed on a far off height.” Her high school years were the years of World War I. Many of her classmates went off to war and some never returned. Marvel had such a friend which I will say something about later.

Marvel Sebert came to Parkview School as a teacher in 1925 having graduated from Otterbein College in 1921. The 1927 Arc-Light, Parkview’s first yearbook, gives Marvel’s duties at the school as English, senior dramatics, librarian, girls coach and senior home room. She taught us grammar and how to write a paragraph correctly. My sister, Barb, remembers lots of work sheets.

She reminded us to mind our "Ps" and "Qs." We put together poem anthologies, gave speech demonstrations (Emily Cross took off her skirt and ironed it for the class), read Silas Marner, and learned about the great cathedrals of Europe and Great Britain. She retired in 1961.

At class reunions, when the "favorite teacher" subject comes up, Marvel Sebert’s name is often mentioned. Most everyone has a good memory of being in her classroom.

I want to tell you about two students from my class of 1955 that have always been grateful for having Miss Sebert as their teacher. First is Judy Harris. In Judy’s own words:

“As a result of her teaching, when I was just 16, I won a state-wide prize for an essay I wrote and was given a train trip to Washington, D.C., to meet an undersecretary of state. I was accompanied by a chaperone from the Cleveland News, a daily with a circulation in the hundreds of thousands. The fallout was that I was then invited to work one day weekly at that paper for my entire senior year, and our principal, Mr. Wells, allowed me to accept. And this was really thanks to Miss Sebert.”

Anne Reed, also in the class of 1955, and Miss Sebert formed a personal bond. Anne, who received a four-year scholarship to Smith College, was an exceptional student. Years later, while chatting, Anne told me the story about Miss Sebert and her good friend who died in World War I. His body was never found so he wasn’t brought home for burial. Marvel never married.

When Anne graduated, Miss Sebert gave Anne a present to remember her by. The present was a cherished book, “The Yellow Butterflies,” published in 1922 and written by Mary Raymond Shipman Andrews. It is the story of a mother whose beloved son does not return from World War I. (In 1921, Congress passed a resolution to have an unidentified soldier returned to the United States and buried at Arlington National Cemetery as the Unknown Soldier to represent all the sons who did not return.) Anne brought the book out for me to see. What a wonderful gift Miss Sebert gave her. It represented a bit of herself. Anne never forgot.

When Gay and I decided to write a history of Bay Village, “Bay Village: A Way Of Life” in 1973, the historical society produced a flyer, mailed to all residents in the village, announcing the coming of the first written history of Bay Village. Soon after the mailing, Gay and I received a note from Miss Sebert that read, “I’m not surprised you two are doing this. After reading that wonderful flyer about the book and all the pictures, who wouldn’t want to own one.” Enclosed was a check for $1,000. Gay and I won’t forget her either.

Judy, Gay and I are Distinguished Alumni of Bay High School.