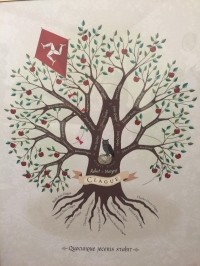 The Clague family tree features a kite bearing the flag of the Isle of Man. Courtesy of the Westlake Historical Society

Second in a series of articles on the Clagues, one of the founding families of Dover (now Westlake). Part I was published Dec. 5, 2017, and is archived at wbvobserver.com/read/columns/digging-dover.

The best known Manx emigrant to America was Myles Standish – the military leader of the Pilgrim Fathers who sailed for New England in 1620. Why Robert Clague, the patriarch of the Dover/Westlake Clagues left the Isle of Man and came to Dover nearly 200 years later, in 1829, is unknown, but we have some clues.

John Feltham, an English travel writer, describing the Isle of Man in 1797, stated that: “The population of the island in general is excessive: it is no uncommon thing for fourteen to be grown up in one family. But in general, except the eldest son and daughter, the whole are obliged to quit the island to gain their bread, and seldom return.” It was also stated that the increase in population had pushed the cultivation of unsuitable land and the rulers of the island raised the rents and tithes, including a tithe on potatoes in the 1820s.

But why immigrate to the Cleveland area? William Sheldon Kerruish, a leading citizen of Cleveland in the early 20th century and second-generation American of Manx descent, offered his thoughts in a 1915 journal published by the Manx Language Society.

“I presume you have heard," Kerruish wrote, "that early Manx emigration from the Isle of Man to Cleveland is said to have been due to some mention made of the place in the early part of last century by a Manx adventurer called Dr. Harrison, who is said to have been a wanderer in Arabia.

"He became connected with the medical staff of Bellingham's army in his attack on New Orleans in the war of 1812, but after the army's defeat, managed to sever his connection with it in some way, and being desirous to see the Falls of Niagara, made his way northward before steam navigation on the Mississippi. He walked through the place [Cleveland], then a village, and thence along Lake Erie's southern shore eastward, saw the Falls and returned to his island home, where he remained in the practice of his profession until his death.

"He is said to have been a man of many peculiarities. An occasional word dropped by him among his countrymen as to the beauties of that southern shore, and its future possibilities, was the cause of the early Manx exodus to Northern Ohio. I have this from several early Manx settlers, and especially from Captain Wm. Corlett, for many years a prominent captain on our inland lakes, who told me that in his boyhood he had heard the doctor dilate as to the beautiful shore of Lake Erie.

Therefore, in those early years of Cleveland, immigrants from the Isle of Man accounted for up to 7 percent of the population. This is quite a contribution from a tiny island, smaller than Cuyahoga County.

Very little is written specifically about Robert Clague. He was the oldest of eight children, born in 1802 at the family estate called BallaCregga, and christened in the parish church of Lonan on the Isle of Man on May 22, 1803. As the oldest male child, under primogeniture he typically would inherit the bulk of his parents' estate, but another clue for emigrating is that Robert may have had strained relations with his parents as indicated by the token inheritance that he received when they died.

Robert came to Dover in 1829 at age 27 but then returned home to marry Margaret Cowell in Lonan, Isle of Man, on April 8, 1837. Together they had nine children, their oldest, Ruth, born on the Isle of Man, all the rest born in Dover. Their youngest, Charles, was born in 1856.

Robert’s subsequent divorce from Margaret in the late 1850s may indicate he was a difficult man to get along with. Family stories say that his desire to continue west when the rest of the family wanted to stay put in Dover was a factor in the divorce and that when he became ill he did come back to Dover.

At the time of his last will and testament, drawn up in June of 1865, his estate consisted of 26 acres of the original 88-acre farm. His son Thomas was executor and his property was to go to his five sons who were to work the farm together until the youngest came of age. Each daughter was left $25 for a mourning dress and $250 was left for relatives back on the Isle of Man, the remainder of the estate to be divided equally between all of his children.

William R. Krause, AICP I am the Assistant Planning Director for the City of Westlake. I have worked for Westlake for 29 years. I served on the Bay Village Planning Commission for 5 years. I was a member of the Reuben Osborn Learning Center Steering Committee. I am a Board Member and Historian for the Westlake Historical Society and a Trustee of the Western Reserve Architectural Historians. I have been married to Debra for 37 years and am the father of three grown children, grandfather of two and owner of two Shih Tzu's.