An American student in France 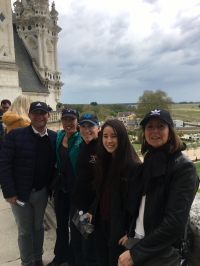 In her 2016-17 school year, Emma Mangels, a 15-year-old exchange student from Westlake High School, could often be found relaxing in a sidewalk cafe, sipping Monaco, a cherry flavored beer, and gazing at the hustle and bustle along the gray cobblestone streets of Châteauroux, France. For a year, that was Emma’s life.

Prior to her time in France, Emma had never stepped outside of North America, yet yearned to see a new side of the world. She spent a year searching for exchange opportunities and sought out the Rotary International exchange program. In November, she filled out an application, sat through several interviews and was accepted the following March.

By summer, Emma packed a whole year into a light blue suitcase, a carry-on, and a backpack. Arriving at Hopkins International Airport, Emma said a tearful goodbye to her family, whom she wouldn’t see for a year.

After a 4-hour layover in Detroit and 9 hours on planes, Emma arrived. Her first night was awkward; she had forgotten how the French greet: kissing both cheeks. A Frenchman, trying to greet her, leaned in uncomfortably close. Emma reeled in confusion. After that encounter, she got used to this kissing-the-cheeks custom and learned to greet everyone – even sick people.

When Emma enrolled in her new high school, she noted, “there weren’t many similarities between America and France.”

For one, the student-teacher dynamic. In American schools, students participate actively in class and typically have a more light-hearted, bantering relationship with teachers. It’s not unusual for students to address their teachers without titles, only last names. In France, the relationship is very formal. For example, in her first class, Emma addressed her teacher using the informal pronoun “tu” instead of the polite, formal “vous.” The whole class burst out laughing. Luckily the teacher, too, had a sense of humor.

“The stereotype that French people are very cold,” Emma said, “is a hundred percent true.” She thought that as a foreigner, the students would swarm her on her first day of school, like they did at Westlake High School. But her French classmates were immediately disinterested when she told them she was from the U.S.

But Emma did make a friend, a good friend, Maureen, whom she’s still in contact with today. Maureen helped her with her assignments and welcomed Emma into her social circle. Emma also thought the teachers might pay more attention to her because she barely spoke and comprehended French. Only her French teacher did.

Also, her new school itself was different. Westlake High School was only a year old when she left: brand new lockers, classrooms and hallways. Her school in Châteauroux was a centuries-old convent, turned wartime hospital, turned school.

France only requires three years of high school. Entering students must declare one of three concentrations: science, economics or literature. American high schoolers aren’t obliged to declare career interests, and are free to take a variety of classes.

Another irregularity was Emma’s class schedule, which worked like the block schedule in American colleges. School started at 8 a.m. and could finish as early as 3 p.m. or as late as 6 p.m. depending on that day’s classes and teachers. She had 15-minute breaks between classes during which time kids and teachers smoked together. They littered the school’s floor with cigarette butts. Emma thought that was gross.

Also, Emma was amused that French kids start drinking around age 14, but cannot get a driver’s license until they are 18. Because they mostly walk or use public transportation, the French usually don’t drive until their 20s and 30s.

Emma’s fondest memory of Châteauroux was that any time of the day, even during class breaks, she and her friends went to bars, sat on terraces, drank beer and chatted. They also relaxed in parks, listening to French alternative rock.

In France, food is essence, if not religion. Where else could garden snails be rebranded as escargot? Even in school cafeterias, the food is farm fresh and carefully prepared.

Schools serve multi-course meals. An appetizer might be a warm baguette with pâté. Emma’s favorite main course: tender duck drizzled with sauce, mashed potatoes and stir-fried vegetables. Next, there is a cheese platter, a bowl of fresh fruit, and steaming coffee. No matter which dining table Emma sat at – school, her host family, restaurant – there was always a fresh baguette.

And no matter how late they worked, her host families would prepare a complete meal. She was introduced to exotic new foods: cow’s tongue, foie gras (liver) and douain noir (congealed sheep’s blood).

In the beginning, language was Emma’s greatest obstacle. With two years of classroom French, she couldn’t speak or understand the language. At first, other students would ignore her. But come December, she comprehended French “perfectly” and started making more friends. By March, she was fluent. Sadly, it was near the end of her exchange. When her family visited her in June, she could translate between her host family and her parents.

Emma said she didn’t do extra work to learn French. She and her classmates had 14 hours of French class weekly, where they wrote and wrote and wrote essays. The immersion itself was adequate.

Emma ended up staying with three host families, one in the city center, one in the suburbs and one on the rural outskirts. They took her on trips, visiting some magnificent castles and churches. At the end of her trip, Emma toured Europe: Italy, Germany, Austria, Czech Republic and Switzerland. She loved Prague, Paris and Venice.

To those interested in exchange programs, Emma said, “If you’re in a different country, don’t lock yourself in your room. You’ll only miss home. If you get the chance to go out, meet new people and see new places – take it.”