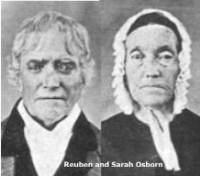 Reuben Osborn lived in Woodbridge, Connecticut, and married Sarah Johnson from the same town in 1802. Reuben and Sarah arrived in Dover Township with their two children, Polly and Selden, on May 17, 1811.

They were greeted by Sarah’s sister, Rebecca, and her husband, Asahel Porter, who had arrived in Dover on Oct. 10, 1810, the same day as the Cahoons.

There were friendly and helpful Indians living in the township at the time. They supplied the families with raccoon for oil, venison and bear for meat and maple sugar for sweetener.

Reuben was a farmer. He planted his fields in corn.

The first thing Reuben did when he arrived was build a log cabin at 29202 Lake Road. Four years later, in 1814, he erected a frame center hall colonial with eyebrow windows at the same address. This house is the oldest frame house between Cleveland and Lorain.

The grandchildren of Reuben and Sarah loved to sit and play in this home. The house was a wonderful safe-haven with the brick oven and the many fireplaces. Reuben’s land bordered the Saddlers on the west, Porters on the east, Lake Erie on the north and south of where Wolf Road is today. Reuben gave his grandchildren, Sherman, Reuben, Samuel, David, and Betsy each a parcel of this property for a farm. These grandchildren raised berries, fruits, oats, corn and wheat. Grapes were prepared and driven to the Broadway Road Market in Cleveland, a distance of 14 miles, to sell at their stall.

Reuben and Sarah’s daughter, Polly, never married and died in 1870. Their daughter, Julia, born in Dover in 1813, died in 1833. Selden married Nancy Ruple. They built a home at 29059 Lake Road in 1832. It was the birthplace to three generations. It was the first home in Bay Village to have a bathroom.

The Osborns rented out cottages on the lake. Many of the near greats of Cleveland came to their cottages for summer vacations as paying guests. Reuben was an herb doctor and Nancy helped him prepare his poultices and salves in their kitchen. They grew the herbs behind the house and gathered natural berries and leaves in the woods and fields.

Sabbath was kept the Puritan way in Selden and Nancy Osborn's home. It began at 6 a.m. on Saturday, church on Sunday morning, a hasty meal and back to the Methodist Episcopal church at Lake and Bassett roads.

Selden and Nancy had nine children who would be Reuben and Sarah’s grandchildren. Their son, Sherman, married Nettie Phinney and built a home at 29560 Lake Road. Sherman was a farmer. Sherman and Nettie’s children were Calvin, Albert and Emily. Across the street from Calvin’s house, which was next door to Sherman’s, was Calvin’s barn (today it is behind the football field and holds equipment.). Next to that was the first log cabin school house, then Red Brick School house, and the water pump.

Minerva was Selden and Nancy's second child. She married Levi Judd and moved to Geauga County. Betsey, the third child, married Barney Williams and farmed at 29357 Lake Road. Samuel Osborn married Mary Crocker and lived on Cahoon Road on a piece of property given him by his grandfather Reuben. He was a farmer. Mary and John were the fifth and sixth children of Nancy and Selden. Not much is known about them. The seventh child was Reuben II, born in 1847. He married Eunice Chadwick in 1870 and moved to the homestead house at 29202 Lake Road. Reuben II was the first mayor of the Village of Bay.

Reuben and Eunice had five children who would be Reuben’s great-grandchildren. George lived just east of Aunt Betsey; Irving and Clare lived east of George at 29323 Lake Road. Luella lived at 29219 Lake and Lucy lived with her parents in the homestead house. The eighth child was Julia who married Thomas Mitchell and farmed in South Dover. David DeForest was the ninth child. He married Rose Mitchell.

David and Rose had five children who would be Reuben and Sarah’s great-great-grandchildren. Julia married Lewis Scott. Julia Osborn Scott was a librarian at the Dover-By-The-Lake library. Rose married George Morgan. He was the mayor of the Village in 1922, and they lived east of Selden at 29039 Lake Road. Rose Osborn Morgan and George Morgan had three daughters: Mrs. Helen Inglis, Miss Sarah Morgan and Mrs. Ruth O’Connor. David and Rose's daughter Mabel, born in 1891, married Warren Meddick and resided in Selden’s Lake Road home.

The Osborn homestead house was moved from its original Lake Road site to Cahoon Memorial Park in 1995. Today it is the Osborn Learning Center, presided over by the Bay Village Historical Society.

Sally O’Connor is still in contact with the historical society and has been very helpful with this information.