FYI: Opera and Napoléon on the same page 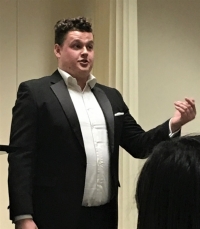 A quote attributed to Napoléon Bonaparte states, “Music is what tells us that the human race is greater than we realize.” His words would not be questioned by the audience in attendance at the April 23 "FYI: Opera" program at Porter Public Library. They listened with rapt attention to three outstanding Oberlin Conservatory of Music opera voice students and expressed their gratitude with heartfelt applause when final notes were sung.

Field then introduced Caitlin Aloia, soprano; Gabriela Linares, mezzo; and Shawn Roth, tenor; and provided insights on composers, the music, and descriptions of the character before each performance. Tony Cho, music director and coach for Oberlin Opera Theater, skillfully accompanied the singers on the piano.

Roth opened the program with an aria by Richard Strauss revealing a powerful voice, filled with warmth and feeling. His performances of arias by Tchaikovsky ("Eugene Onegin"), and Franz Shubert underscored the excellence of Roth’s voice. Yet his final selection, the Soliloquy by Billy from Rodgers & Hammerstein’s "Carousel," amazed his audience.

Linares has a strong, pleasing, mezzo voice, qualities that fit characters of “young boys” which profiled her first two selections. In her opening Mozart aria and in an aria from Gounod’s "Faust," Linares portrayed a 13-year-old boy and a love-sick boy. But her manner completely changed when she sang “What a Movie” as the wife Dinah, from "Trouble in Tahiti" by Leonard Bernstein. Her talent and versatility were duly noted and appreciated by the audience.

Aloia’s three solo arias included the maid Despina from Mozart’s "Cosi Fan Tutte" and Susanna’s aria from Act 4 of Mozart’s "Marriage of Figaro." While bringing her roles to life, Aloia was a visual delight as she offered an auditory feast. Her beautiful voice conveyed emotions that were strongly backed up by fitting expressions and actions.

The voices of Aloia and Linares combined for the finale presentation of the “Flower Duet” from the opera "Lakme," by Leo Delibes. An exceptional gift of music was wrapped with yet another layer of beauty.

Comments from one member of the audience sum up the evening well. “Simply outstanding! Shawn’s rendition of Soliloquy was as good as any I’ve heard … and I’ve heard it plenty. The gals' duet, beautiful.”