Then and Now: Taking a look at Bay's sports teams 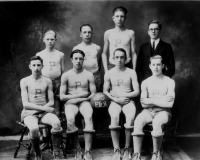 A good corner lot, a hoop on the side of a barn, a sturdy oak tree, or a plowed acre of land became a playing field when a group of Bay boys came out to play. Until the new Parkview School was built in 1922, Bay had no athletic department. Pick-up games were the thing of the day.

Then Bay built a new school. The children from the Red Brick School House on Lake Road (east of Rye Gate) became the tenants of the new school. Grades ranged from one through nine.

Bay named the new high school Parkview as it overlooked Cahoon Memorial Park. It didn’t take long for the Bay students to become involved in the athletics offered and to choose school colors – blue for the blue waters of Lake Erie and white for the waves the students could see from their second-floor windows.

The first sports competition documented was in basketball. The season began in January 1924. The team played 14 games, finishing with a record of 6 wins and 8 defeats. There were no upper grades at the time and only freshmen competed against similar competition. The only documentation of this basketball season was the team’s record for the year.

The first interscholastic sports involving Parkview occurred in the fall of 1924 when Coach G. D. Thompson and his football team of 16 freshmen and sophomores took the football field for the first time. The team played five games against varsity and junior varsity competition. We know they won and lost games to Dover (Westlake) and lost to Ridgeville (North Ridgeville) varsity but finished the season with a win at Rocky River that year.

In 2018, Coach Ron Rutt had a successful year with the varsity football team, recording 8 wins and 2 loses. Making the playoffs, the team fell in the first round.

In January 1925, Coach Thompson’s Parkview basketball team of seven boys took the floor against Fairview. The 1925 team achieved a record of 6 wins and 3 loses. Fred Troyan was the high point man with 37 points for the season.

The class act at Parkview was the girls basketball team which was coached by Miss Kruss. The varsity team of 1924-1925 was undefeated in league play while the junior varsity lost only one game. The teams played boys rules (three-division floor), and girls rules (six on a side, three defense and three offense). Marie Blaha, the star of the team, was offered a professional contract to play ball after high school. Although no mention could be found, this team won the first championship for Parkview.

The teams during those early years were cheered on with the following:

Who Barney Google, Andy Gump,
We‘ve got the rest all up a stump,
Parkview will work, Parkview will win,
Or else somebody'll get kicked in the chin!