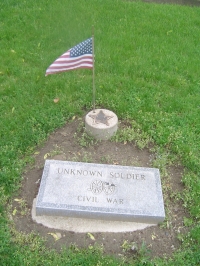 A stone marks the burial site of an unknown Civil War soldier who washed ashore and was buried in Lakeside Cemetery.

An old cemetery plot map noted the location simply as “soldier” section OP6:6. When Cathy investigated, she found the grave marker with information missing about the man. What we know is the never-identified body of a soldier washed ashore by Lake Erie near Wischmeyer’s beach during the Civil War and was buried in his Union uniform. Much speculation had him falling from the cliff.

There are 280 burials in Lakeside Cemetery. The small cemetery has 19 veterans, including soldiers from the Revolutionary War, War of 1812, Civil War, Spanish-American War and World Wars I and II.

Cathy mentioned the absent marker and another missing stone for a WWI Army veteran to Richard E. Ross, Bay Councilman, Vietnam vet and chairman of the Bay Memorial Day Parade. Richard contacted the Cuyahoga County Veterans Service Commission who then provided markers for the soldiers. The commission added a drawing of a vintage cannon to the unknown soldier’s stone. The inscription reads “Unknown Soldier/Civil War.”

A dedication ceremony was commissioned on July 3, 2000, and veterans from all services and wars were invited to attend a ceremony at the cemetery to honor the dead soldiers. The following was heard during the ceremony: “In the midst of our country’s celebration of our independence … We gather and pause in honor … and to bring closure to … the life of the man known only as 'Ohio’s unknown soldier' … as we dedicate the stone that now marks his grave. ... For whatever the reason he came to be here, it is fitting and proper that we gather here today, on the eve of the 224th anniversary of the founding of our nation.”

Burials at  the Lakeside Cemetery have been remembered in a special observance since 1913. Nellie Dodd, school teacher and daughter of Charles and Annie Dodd who lived on Osborn Road, began the tradition of honoring those at the cemetery with a walk originating from the Methodist church at the corner of Bassett and Lake roads.

Sarah Wymer Dodd recalls servicemen and children walking together, placing flowers on graves. They would then return to the church for a picnic.

Sometime in the 1920s the parade developed into one very similar to the Memorial Day observance we participate in today. A local priest or minister from one of the Bay churches is invited to the ceremony. He/she read the invocation which states: “This day is sacred with the almost visible presence of those who have gone before us. We honor the memory of those who gave their lives in the service of our country and of those others who have dropped their burdens by the wayside of life and are gone to eternal rest. May the ceremonies of today deepen your reverence for our dead. Let us resolve by work and deed to emphasize the privilege and duty of patriotism.”

After the graveside service and taps have been played, a parade makes its way to the Cahoon Memorial Park Rose Garden for the reading of the soldiers' names who died fighting for our freedom.

“May time deal gently with the living, and embalm in all hearts the memory of the departed.” (Sentiments offered by Mr. and Mrs. J. Harris at the Cahoon Pioneer Celebration in 1874.)