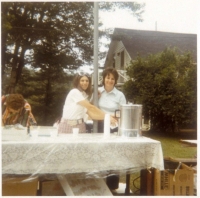 Gigi Monroe and Gay Menning make coffee for the vendors at an Antique Show in the 1970s.

The Bay Village Historical Society’s 50th annual Antique Show will be held on Saturday, June 15, in Cahoon Memorial Park. The Antique Show was the idea of Gigi Monroe. I remember it well 50 years ago when planning began for the first Antique Show.

Bob and Gigi Monroe were already active in the historical society when Gay Menning (my twin sister) and I joined in 1968. In fact, Bob and Gigi lived on the second floor of the Cahoon Homestead House, Rose Hill Museum. Planning the venue and getting our members to participate was challenging. Gigi knew what she was doing but the rest of us were new. I think the first Antique Show was held in September.

As I recall, we started out early in the morning with coffee and donuts for the vendors. The ladies baked and we had a bake sale. Wieners, chips, and pops were set up in a tent and sold by the men of the club. The Herb Guild made Tussie Mussies of sage, basil, yarrow, fever-few, lavender and Queen Anne’s lace tied up with a ribbon; we all bought one and took it home. The vendors were lined on both sides of the drive from the Community House to the Osborn Learning Center (which wasn’t there back then). The day before the show, our gentlemen members marked off the vendors' spots to set up their tents.

I do remember the year I was the chairman of the show. Friday dawned as a beautiful day. We knew there was a hurricane down south coming our way but we weren’t sure that it would affect us. The men mapped out the park for the vendors and we all went home. The next morning my phone started ringing at 5:30 a.m. It was a vendor. Should I come? How is it there? Well, needless to say the weather had changed and we were deluged with rain. We eventually had to cancel.

Through the last 50 years the always unexpected challenged us but the show kept improving and became very popular. People joked that if it was the Antique Show weekend it would probably rain.

Again today we are being challenged. Not as many people collect any more. This could be our last show. I hope you come out and participate in a 50-year tradition in Bay Village by attending the "Cahoon in June" Antique and Craft Show in Cahoon Park.