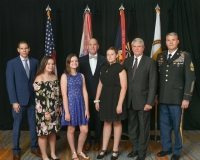 Congratulations to the Microfiber Fighters, who were chosen as the eCyberMission National Finalists along with 20 other finalist teams in the 2019 U.S. Army-sponsored competition. We were selected from 5,097 teams to attend a week-long National Judging and Educational Event (NJEE) in Washington, D.C.

Activities included hands-on STEM workshops led by Army scientists and engineers, a special session hosted by the National Inventors Hall of Fame, a visit to Capitol Hill and Congressional Library, and a tour of the National Mall. In our visit to Congress we met with Senator Rob Portman’s legislative correspondent, Sam Hattrup, who stated: “The health and well-being of Lake Erie is one of Senator Portman’s top priorities; the senator would be interested in the research of Microfiber Fighters.”

After a ride on the Senate train to the other side of Congress we met with Congresswoman Joyce Beatty who was also very interested to hear of our project to prevent microfibers entering out into lakes from washing machines.

“Your achievements set you apart from the 5,000-plus teams competing this year – a true testament to your dedication, enthusiasm and quest for knowledge," said Major General Cedric T. Wins, Commanding General of the U.S. Army Combat Capabilities Development Command. "Your outstanding efforts embody the U.S. Army’s vision for providing a STEM education and career path.”

The highlight of the week was at the Friday awards luncheon and ceremony where the Microfiber Fighters were presented with the 2019 eCyberMission Army Values Award for “Our embodiment of the Army Core Values throughout the NJEE. This team consistently demonstrated those traits that define the very foundation of the U.S. Army and its Soldiers: Loyalty, Duty, Respect, Selfless Service, Honor, Integrity and Personal Courage.”

As members of B.S.A. Maritime Explorer Club 360, sponsored by Bay Sea Scouts, we were excited to receive this award as it demonstrates that we do strive to live by the Scout Oath and the 12 points of the Scout Law. For details on joining our co-educational crew please contact Richard Gash at joinseascouts@gmail.com or 440-829-7048.