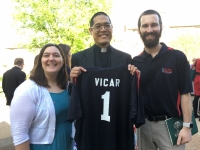 St. Paul Westlake installed a new vicar in services on Sunday, July 14. Vicar Chad Bolosan is eager to get started in his role as pastoral intern.

Bolosan, 44, and wife, Sherry, are the parents of Annabelle, 8, and twins Emma and Charlotte, 3.

“I fell in love with sharing the gospel, and it’s wonderful seeing it in other people,” he said.

Answering God’s call into the ministry happened after Bolosan had already devoted 20 years to his first career, as an accountant. He is a graduate of Michigan State University, and worked for a series of private firms throughout his two decades as a numbers man.

“It was a great profession to be in, but I was drawn to the church,” he said. “I had a built-in support system in my family. My wife has been totally on-board. We made the decision together."

And it’s a decision he’s very happy about.

“I love it here,” he said of St. Paul Westlake. “We’ve been immensely welcomed and made to feel very loved."

Bolosan will serve as vicar for one year, and will then return to Concordia Lutheran Seminary in St. Louis, Missouri, to complete his final year of study. He will be officially ordained into the Lutheran Church Missouri Synod upon graduation.

Bolosan was born and raised in Hawaii, and lived there until he went to Michigan State. His home congregation is now St. Peter Lutheran Church in Schaumberg, Illinois.

His wife, meanwhile, is a native of Davenport, Iowa. She works part-time for Lutheran Church Charities, based out of Chicago. She also has expertise as a Director of Christian Education (DCE).

The family is settling into a home in North Olmsted, and are excited for the time ahead.

Bolosan said he thinks there are some key ingredients that go into being a good pastor.

“You have to have a lot of patience,” he said. “I also think being a caring spirit is important. You have to put the needs of others first and sacrifice a bit of yourself.”

Rick Haase is Director of Admissions at St. Paul Lutheran Church and School in Westlake