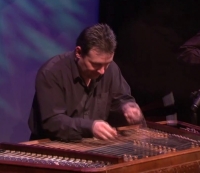 Though he has appeared as a guest artist and substitute for The Cleveland Orchestra, Alexander Fedoriouk has worked with many other types and sizes of musical groups primarily as a soloist or chamber music player. He has been heralded as one of the greatest cimbalom players in North America, who is also known as an accomplished percussionist, woodwind player, accordionist and instrument maker. He grew up in Ukraine, and received a degree from Kiev State Conservatory. Reviewers have claimed, “Fedoriouk can play with a speed that is barely comprehended!”