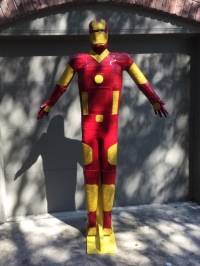 Each year, not long after I take in the various figures my wife, Elaine, and I have out on our driveway and porch in October for Halloween, I’m asked who I will be making next. My short answer always, “I don’t know.” I don’t give any thought to that until the following spring, usually after some sort of inspiration.

This year the great success of the last Avengers movie encouraged me to make Ironman, and a request by our great-grandson, 5-year-old Stephen, prompted me to make a second figure, his favorite – Black Panther. Before these, I was able to make Linus to join my Peanuts family. Linus was completed in time to join all my figures on display at Porter Library in May.

I have more figures now than room to display them so I save the Peanuts gang for a Charlie Brown Christmas showing in December. All other figures will be out the first week in October at 1988 Sperry’s Forge Trail in Westlake. Visits and photos are welcome.

Mel Maurer is a retired Manager of Administrative Quality and Distribution for the Boston Weatherhead Division of Dana Corporation. During his 43 years with Dana, He held management positions in Accounting, Information Technology and Administrative Quality and Dsitribution. Mr. Maurer’s civic duties when working included being a member of the Williamson County Chamber of Commerce serving as Chairman of the Government Relations Division and serving as host of the Chamber’s Public Affairs Roundtable. He was also member of the Brentwood Chamber of Commerce - Government Affairs Committee and a member of the U.S. Chamber’s Public Affairs Committee. He also served as a member of the Williamson County Economic Development Showcase Committee, a member of the Tennessee Association Of Business Public Affairs Committee; a member of the Policy Board of Directors for INROADS/NASHVILLE INC. and a member of the Board of Directors of the Williamson County Heart Association. He wrote columns on government affairs for the Chamber Newsletter and the Nashville Multiple Sclerosis Association. He chaired the Williamson County Toys For Tots (T4T) Campaign and chaired the Government Relations Committee of the Middle Tennessee MS Society. In his retirement, he is a member of the Government Relations committee of the Buckeye Chapter of the MS Society and a 2007 enductee into the National MS Society’s Volunteer Hall of Fame and was selected as one of the “Faces of Westlake” in 2007. He is past president of the Cleveland Civil War Roundtable, now its Historian, and past president of the Philosophical Club of Cleveland and a member of the Titanic Historic Society. He is the 2009 Charirman of Westlake’s Charter Review Committee. He also writes articles for various organizations and speaks on a variety of topics. He has had more than 500 “Letters to Editors” printed in a number of newspapers and magazines including: Time, Readers Digest, USA Today, The Plain Dealer, The Sun Press, The Nashville Tennessean, The New Republic and others. He is also a published poet. He has hosted over 50 hours of TV shows broadcast on on cable in Cleveland and other cities in Northeast Ohio and has appeared in two plays presented by the Civil War Roundtable and one at the Huntington Playhouse. Mr. Maurer received a Bachelor of Science degree from John Carroll University in Cleveland, Ohio. He and his wife, Elaine, live in Westlake, Ohio. They have four children, eight grandchildren and one great granddaughter. His interests include writing and speaking on community affairs, charitable causes, history, political issues and personal experiences.