The heART of Cleveland at BAYarts this December 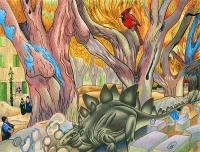 "The heART of Cleveland" by Scott Kraynak

Courtesy of curator and local artist Scott Kraynak, "The heART of Cleveland" is coming to BAYarts for the holiday season. The exhibition is based on the book of the same name, which was released last year. Artists from the current book, as well as a future book, will be featured.

It was at the Grand Canyon that Kraynak came up with the idea for the project. "I was just thinking about home, which was a common occurrence, and thought about all the great features of the city, but even more so, thought about all the great artists born and bred in Cleveland." This lead to the idea for a book of Cleveland artists of "all styles in all fields who are from the city."

The next step was talking to his friend, Brandon Weil. "He loved the idea and said he would do the logo and book design. "So with Brandon on board, I knew we could come up with something great." With this confidence, they moved ahead finding the artists to contribute.

What's featured in the book are monuments that are Cleveland icons. It includes a mix of what you'd expect (the West Side Market, Terminal Tower, Hope Memorial Bridge, Rock and Roll Hall of Fame) as well as some more rare gems (steel factories, "every day" Cleveland life, live music venues.)

As Kraynak puts it, Clevelanders know what's best about their city. "I would summarize this book as being a collection of all the features and places and people that make Cleveland great and interesting, seen through the eyes of the city's many, many talented native artists. For me, that this book exists, is a testament of how many people love this city and are proud of being Clevelanders. This idea was overwhelmingly supported from day one and I couldn't have done this without the help and effort of so many others who feel as I do about our city."

While working as a park ranger all over the country, Kraynak has always talked up Cleveland. "I tell people Cleveland is a hidden gem or an undiscovered treasure of a city," he relays with great pride. "I say that Cleveland possesses all of the qualities and traits that great cities are measured by and then some." Often, he has observed, people say other cities surpass Cleveland, but that isn't necessarily the case.

"I explain that it's cultural institutions, museums, food, music, architecture. I think people just remember the past like the river catching fire, the city defaulting and our crappy football team (though that is also current) and just automatically think Cleveland isn't a nice place."

Finally, what Kraynak loves the most about Cleveland is its people. "A great thing about this town is its citizens. We are hard-working, humble, and proud of our city, and I don't think most of us care what others think. It's their loss if they want to think like that because we don't need them. We already know what we have."

"The heART of Cleveland" exhibition opens during the BAYarts Holiday Shop open house on Saturday, Nov. 23, and runs through Dec. 22. A meet the artist's reception will be held Friday, Dec. 6, from 7-9 p.m.