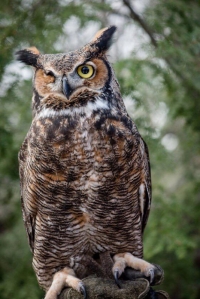 Owls are mysterious birds that have captured the attention and curiosity of people all throughout the world. There are over 200 species of owls that come in all shapes and sizes. The most common owl of the Americas is the Great Horned Owl. Great Horned Owls can be found across the continental U.S. in a broad range of habitats, most typically in woods interspersed with open land.

Their eyes are not true “eyeballs”

Great Horned Owls have large eyes, pupils that open widely in the dark and retinas that contain many rod cells for excellent night vision and depth perception. Many are surprised to learn that the eyes of all owl species are actually tube-shaped and immobile in their sockets. Fortunately, owls can rotate their heads up to 270 degrees to look in any direction.

They are skilled, powerful hunters

Great Horned Owls are efficient nighttime hunters. Their soft feathers provide insulation against cold weather and allow them to strike quietly in pursuit of prey, which include animals several times heavier than themselves. When clenched, a Great Horned Owl’s strong talons require a force of 28 pounds to open.

They often mate for life

It is believed that Great Horned Owls are monogamous creatures that stay together for at least 5 years, perhaps for life. Members of a pair often remain on the same territory year round. If something happens to one of the pair, the survivor will usually find another mate.

They are the earliest to nest in Northeast Ohio

Great Horned Owls begin nesting as early as January. They typically adopt nests that were built by other species, but will also use cavities in live trees such as cottonwood, juniper, beech and pine. Despite winter's harsh conditions, females incubate their eggs at a warm 98 degrees. After a successful nesting season, owlets will hatch completely featherless and heavily reliant on their parents, remaining near them until the end of summer.

The oldest recorded Great Horned Owl was found in Ohio

This species is probably the most long-lived of North American owls. According to The Cornell Lab of Ornithology, the oldest wild Great Horned Owl on record was at least 28 years old when it was found in Ohio in 2005. A resident Great Horned Owl at Lake Erie Nature & Science Center lived to be at least 37 years old.

Interested in learning more about native owl species? Join Lake Erie Nature & Science Center for its annual Owl Prowl on Saturday, Feb. 8, at 6:30 p.m. Meet the Center’s resident owls, then head outdoors for an evening hike with resident birding expert Tim Jasinski in hope of spotting wild owls in the forest of Huntington Reservation. Fee: $10/person; children ages 2 and under are free. Purchase tickets online at www.lensc.org or by calling 440-871-2900.