From backyard to center stage for this 'Rising Star' 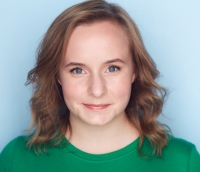 "Catch a Rising Star" is a unique musical preview of budding talent ready to blossom that will take place on Tuesday, Feb. 18, at 7 p.m., at Westlake Porter Public Library, 27333 Center Ridge Road.

For the eighth year this exceptional program, sponsored by the Westlake-Westshore Arts Council and offered free to the community, will showcase the talents of a senior student in Baldwin Wallace University's prestigious music theater program. Sydney Howard, who will perform on Feb. 18, is a "Rising Star" completing her studies in the BW program.

Beth Burrier, BW associate professor and music director, will accompany Howard on the piano, providing the perfect platform for the performance of a variety of theater music and more.

Some of Howard’s Cleveland theater credits include her participation in the 2018 world premiere of "Jane Eyre the Musical" with Cleveland Musical Theatre; role of Lauren in the academic premiere of "Kinky Boots" at Baldwin Wallace; role of Rose in "Dogfight"; Narrator in "Joseph and the Amazing Technicolor Dreamcoat" and role of Natalie in "Next to Normal."

Describing it as "an incredible opportunity," Howard said last spring she was able to study at the Danish National School of Performing Arts in Fredericia. "I learned so much from the three months I spent there," she said.

But Howard's performance and musical roots were planted in Rochester, New York, where she grew up writing plays to be acted out in her backyard by her and her friends. She also revealed that she started singing before she could walk. Howard explained that her mother is a singer, who continually sang to her when she was a baby and her father has a “passion for popular music.”

Howard described a pivotal event for her happened at a young age. Her backyard plays, playing saxophone in her school concert band, and doing drama at summer camps, were the norm until she was 12 years old. Then she said “I played JoJo in 'Seussical,' and never stopped performing in musicals after that.”

Enjoy the WWAC’s eighth edition of “Catch a Rising Star” and see this young talent who thrives in environments where she is able to use her imagination freely and who is “still working on being totally free.”

This program, offered free to the public, embodies the WWAC mission to provide an enhanced and broadened cultural life that will promote awareness, education and involvement in the arts.