Then and Now in Dover, Part 3 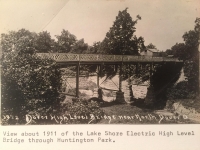 In the Volume 11, Issue 2 edition of the Observer, published Jan. 22, 2019, can be found the first Digging Dover “Then and Now” article based on postcards shared by Westlake resident Bob Collins. The printed version of the article included photographs of three postcards with typewritten captions, and a current picture of the same three views, now. The online version, which can still be accessed, includes five “then” and five “now” pictures.

In the last edition of the Observer, Volume 12, Issue 2, published Jan. 21, 2020, was the first “Now and Then” article. It includes the circa 1910 postcard photograph of either the Oviatt or Cahoon sawmills and a current photograph of what was possibly the Oviatt sawmill site as well as another photograph showing a bridge in Rocky River with a Lake Shore Electric trolley car dangling over the edge.

In an effort to confound future researchers, this article will be called “Then and Now in Dover, Part 3.” Because after all, the “Then and Now” articles have only been published “now and then” (with nearly a year’s separation between the first two articles). So, let’s get back on track (pun intended).

When the first “Then and Now” article was published we had no idea what a “RPPC” was, even though we have seen many of them over the years. If you read the “Now and Then, Part 1” article in the last edition, you may remember we discussed “RPPCs.”

We mistakenly called them “real picture postcards” but they are really “real photo postcards” which are a “true photograph produced from a photo negative and chemically transferred to photographic paper with a postcard backing,” as per the book, “Lorain, The Real Photo Postcards of Willis Leiter” by Arcadia Publishing.

Willis Leiter was the gifted Lorain based photographer who produced all of the real photo postcards that we have seen of Dover. He had a studio in Lorain from 1901 to 1917 and one in Akron in the 1920s.

Confusing to readers of the article was the insertion of the words “Lake Road” before “bridge” which placed the Oviatt sawmill in the location of the Cahoon sawmill and the three possible locations of the bridge! Hopefully the accompanying map will clear up some of the confusion.

The mystery still to be solved is where exactly was the high level bridge near North Dover that Willis Leiter mentions in the captions of at least two of his postcards? The most likely candidates are either at West Oviatt and Cahoon roads or behind Bay Village City Hall in the vicinity of today’s sledding hill.

If anyone remembers seeing the bridge at West Oviatt and Cahoon which may have survived into the 1950s or has other photographs or other information about the high level bridge(s) in Dover please contact the author at wrk295@aol.com.