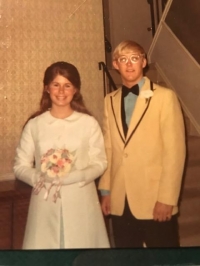 Fifty years ago, the 1970s opened with a bang: The 26th Amendment granted 18-year-olds the right to vote; Apollo 13 launched on a fateful mission to the moon; and Bay High School’s class of 1970 attended prom. While seemingly superfluous, prom’s place on the national conscious can be traced across three centuries, providing generations of Americans with eager anticipation and entertaining anecdotes.

Prom’s history begins in the latter half of the 19th century; a well-known early mention is in the papers of a student at the all-male Amherst College, who in 1894 attended a dinner and dance with the students of the neighboring all-female Smith College. Throughout the early 1900s prom shifted to high school students, becoming a nationwide event in the latter half of the 1930s. Postwar economics allowed the 1950s elevation of prom from the high school gymnasium to the country club ballroom, and a swanky iteration of prom stepped forth in style.

Although prom’s popularity had diminished during the youth-lead counter-cultural movement of the 1960s, on Saturday, May 2, 1970, Bay’s seniors partook in their own prom, drawing on past traditions while simultaneously setting new precedents.

Of the 305-strong class, only a few attendees arrived at Avon Oaks Country Club driving their own cars; the majority borrowed their parents'. The ubiquitous stretch limo, created around 1928 and a staple in today’s prom popular culture, did not make an appearance. Dinner and dancing were enjoyed from 6:30 in the evening to 11:30 at night.

In the absence of a Royal Court, class officers and their dates were seated at a head table. Continuing at Wagner’s Country Inn in Westlake, After Prom lasted from midnight to 4 in the morning, and featured casino and carnival-style games manned by parent volunteers, complete with pretend money and door prizes.

While abundant in fun and games, prom is traditionally a formal event, and Bay’s seniors were dressed for the part: Lovely ladies with hair swept up in partial updos, wearing long gowns accessorized with white gloves, to which a floral wrist corsage or nosegay was added, accompanied by stylish young men in double-breasted tuxedo jackets in riotous colors of lime green, yellow, and white brocade, while their more reserved contemporaries preferred a more traditional look. A big bow tie was a must, no matter what color suit with which it was paired.

Carried over from the late '60s, these soft, flowy looks for the ladies of Bay and the bright, modernist style for their escorts were signs of societal changes that continued into the '70s. These new tastes were seen across the country, as noted by GQ magazine. “The peacock has replaced the penguin,” GQ declared in November 1969, “and once-sacrosanct traditional formal wear has been assailed by startling fabrics, designs, and colors.”

This change was not limited to clothing choices, as Class of 1970 Bay alumnus John Shepherd remembered:

"I hired the band. It was the first time a ‘rock band’ (long hair and all) had been hired for a Bay Prom. Before then it was always swing/jazz live entertainment. They had [brass] horns and played some Chicago songs, [and] opened with a Jimmy Hendrix feedback-infused version of 'The Star-Spangled Banner.' The school authorities pulled me to the side after the first song and told me I had ruined the whole affair by getting this band. [The band was] excellent, loud, and everyone danced and had a blast. The times, they were a-changing."

As a traditional rite of passage, prom has seen many changes reflecting shifts in popular and political culture. While the impact of personal tastes and outside forces have varied greatly from year to year and decade to decade, with each class a unique experience continues to be added to the collective history that is the American Prom.