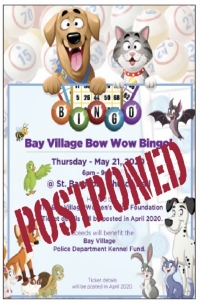 In August of 2019, the Bay Village Police Department responded to an unsecured and abandoned home to encounter two very dehydrated and starving dogs. One of the dogs resembled a greyhound but it was in fact a young, male Bullmastiff. It stood in a secured cage, filled with urine and fecal matter. The other dog, a male Husky, was roaming inside the house, also filled with dog waste and debris. Neither one had access to food or water. A utility worker had arrived to disconnect utilities and when he saw the dogs, notified the police. A hero for the dogs!

Officers immediately removed the neglected dogs from the environment and placed them in the Bay Village kennel. The animal control officer transported the dogs to Avon Lake Animal Clinic. It was determined they were both young, un-neutered males and malnourished. Vaccine history was unknown.

Several trips to the clinic and overnight vet care would occur throughout the multiple month process. The dogs were slowly hydrated, under the supervision of veterinarians from Avon Lake Animal Clinic. Special diets, including homemade bland diets, were prepared and delivered by the Friends of the Bay Village Kennel. They also paid a mobile pet groomer to bathe both dogs since they were not current on vaccines. Medication, toys, treats and bedding were also routinely provided.

The Bay Village police officers visited four times a day, seven days a week in conjunction with Bay's part-time animal control officer to feed, medicate, clean and entertain the dogs, now known as Apollo and Baker, for a total of 96 days. The officers on all shifts supervised their safety and the process in order for the dogs to safely gain weight and continue their ongoing medical care.

The Bay Village kennel is not set up for long-term engagements. At times, it was crowded when other strays were brought in. Due to certain legal issues and the charges being brought against the owner of Apollo and Baker they needed to be housed at the Bay Village kennel.

Approximately 60 days into the process a family from Parma presented very detailed documents stating that the dog known as Baker had at one time been in their possession. This family was allowed regular visitation with Baker until he was released to them after 73 days in the kennel.

The kennel fund was drained from the expenses. "Bow Wow Bingo," a fundraiser sponsored by The Bay Village Women’s Club Foundation and emceed by FOX 8 personality Beth McLeod, has been postponed due to the COVID-19 virus. It will be rescheduled at a future date.

In the interim, if you would like to donate to support rebuilding the city kennel fund, please make a monetary donation payable to The City of Bay Village and earmark it for budget line 284/kennel fund, attention Renee Mahoney, Finance Director. Donations may be mailed to 350 Dover Center Road or dropped off in the sewer payment box outside City Hall.